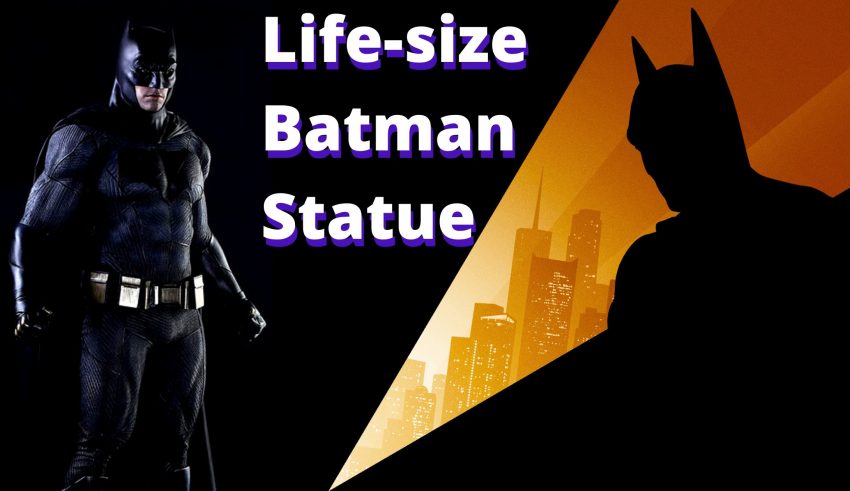 DC and Marvel are two of the biggest brands bringing us some to the best fictional characters. We owe it to them for bringing us fascinating characters that can stimulate our imaginations. Batman is one of the most popular superhero characters. He is the Dark Knight, the dark symbol of justice.

He fights because he does not want anyone to face the tragedy he did. Batman is damn intelligent and even without superpowers, he is able to defeat really formidable foes.

Here, we list the websites where you can buy a life-size Batman statue. If you are a fan of Batman and want something for your home, store or man-cave then this list is for you. There are a variety of options to choose from based on the design and budget. We hope you find something cool.

Here Is The List Of Best Life-size Batman Statue: 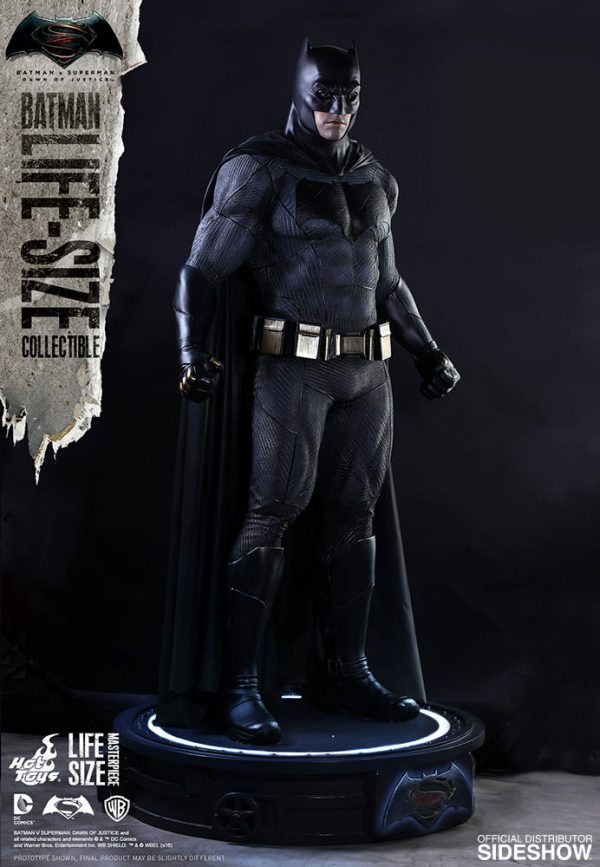 Batman is an iconic comic book character. We saw the character grow over the years and currently, we have one of the best versions of the character. We are patiently waiting for what Robert Pattinson is going to bring to the table. Sideshow Collectibles is one of the top brands when it comes to any kind of pop culture item.

Every piece that the company creates or promotes is very special. This is because of the number of details that they have. Now, in collaboration with Hot Toys Sideshow Collectibles presents you a life-size Batman statue. A lot of people did not like the latest Justice League movies.

The character of Batman was very underwhelming. But we do believe that Ben Affleck could have been a good Batman if the script was better. At least we saw another version of the Batsuit. The design gives a sort of retro feeling.

Recently, most of the designs focus on a sort of an armouresque look. It is good to have a change once in a while. If you like the character design from the latest movies then you will enjoy owning this statue. It follows the design of Ben Affleck’s Batman and it looks so freaking good.

It seems as if the Dark Knight is standing in front of you. This is a big statue over 6.33 feet tall standing atop a base which has logos of all the Justice League characters.

Each and every detail has been meticulously added to make this statue very realistic. If you have the budget for it you will not regret owning this masterpiece of craftsmanship. The price of this life-size Batman statue is $7499.99. 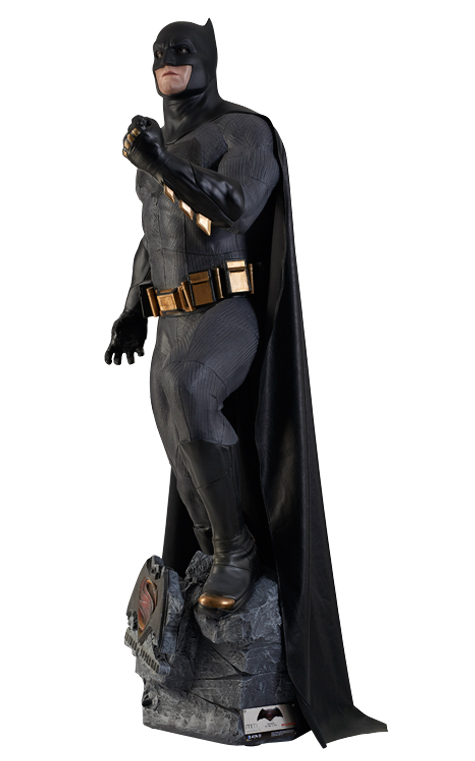 One of the oldest superhero characters is Batman. Bill Finger and Bob Kane were able to bring such an iconic character to life that generations of people will be hardcore fans. Batman is a boilerplate for superheroes who don’t have any power. Though the character has some sort of resemblance to Zorro and other similar characters it was able to make its own mark.

For generations, we have seen different renditions of the character. Every creator tries to add more realism to the character. Thanks to this we saw some amazing versions of Batman on the big screens and cartoon movies. Of course, we are not including the Clooney one.

Robert Pattinson portrays the recent rendition of the character on the big screen. Before him, we saw Ben Affleck in the movie Batman Vs Superman. The movie wasn’t great nor was the character development.

But we really like the Batsuit design. It does not look like an exoskeleton and is similar to the 90s and early 2000s design. Of course, without the black underwear on top. Oxmox Muckle brings you an amazing life-size Batman statue which follows the character design from Batman Vs Superman. Here we see Batman in a dynamic pose. Oxmox Muckle is an awesome brand when it comes to this stuff.

Their attention to detail and high level of craftsmanship makes everything look so real. Looking at the statue you will feel as if it is the real deal.

The statue is almost 7 feet tall standing on top of a base. The base resembles a rocky terrain and has the Batman Vs Superman logo on it. The price of this statue is 3990.90 Euro. This is going to be a perfect addition to your man-cave. 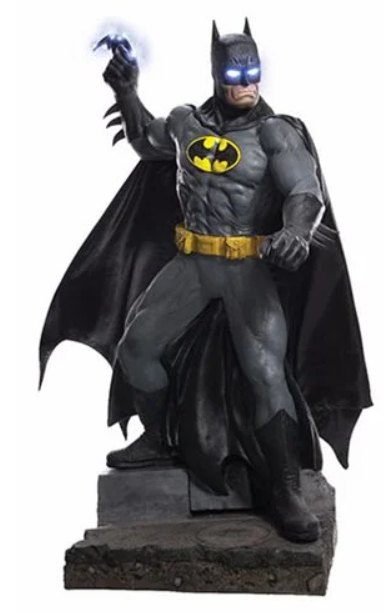 Now, a lot of us like the comic book design of Batman as well. There we see a combination of black, grey and yellow colours in the suit design. We see something similar in the Tim Burton Batman movies. Batman has always been one of the most loved superhero characters of all time.

One of the reasons for this is the depth in his characterization. The way every creator adds an extra layer or polishes the character more gives it the 3-dimensional feeling. This is the reason why Batman Vs Superman did not work. You have to understand the core of the character and then add your own interpretation and polish.

Anyways, let’s take a look at the statue. This is a life-size statue by Rubie’s and it follows the comic book design of the character. This statue looks very cool and the sculpting is amazing. The muscles on Batman look so awesome. In this statue, we see Batman ready to throw a Batarang.

Batman is standing atop a base which looks like a stair. The company has put in nice little details. The Batarang lights up as do his eyes. This makes the statue look more awesome. The height of the statue is 7 feet. You do need to do a simple assembly when you get the product. The cost of this life-size Batman statue is $1499.99. 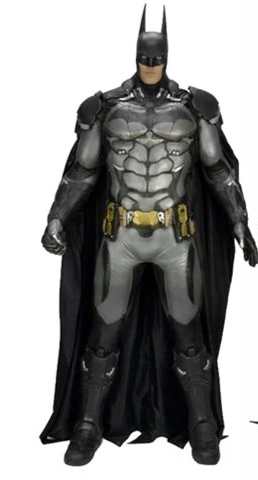 Like most of the popular superhero characters, Batman has been a part of a variety of media. We see Batman in movies, in cartoon series, in comic books and in computer games. The Batman Arkham series games are some of the best superhero games.

Though Arkham Origins and Arkham asylum take the top spots Arkham Knight is an awesome game as well. In this game, we see Batman battle a wonderful array of villains. The mastermind behind all of this being The Scarecrow who is ready to release his toxins in Gotham. This Batsuit that we generally see in these games resemble more of an armoured form. They look like high-grade military gear.

If you like this design then check out this life-size Batman statue. It bases its looks on the character from Arkham Knight. This is a foam statue which has been designed using the digital files from Arkham Knight. The statue comes from China and stands over 6 feet and 2 inches tall. There is no base for the statue, it stands upright on its feet.

The main materials are foam rubber and latex. The artist used a mix of fabric for the cape to give it a more game-accurate look. Every detail on the statue looks amazing and the artist painted the statue by hand. This statue will be a head-turner for sure. So, if you love Batman’s look from the video games then give this one a consideration. The cost of this life-size Batman statue is $999.99. 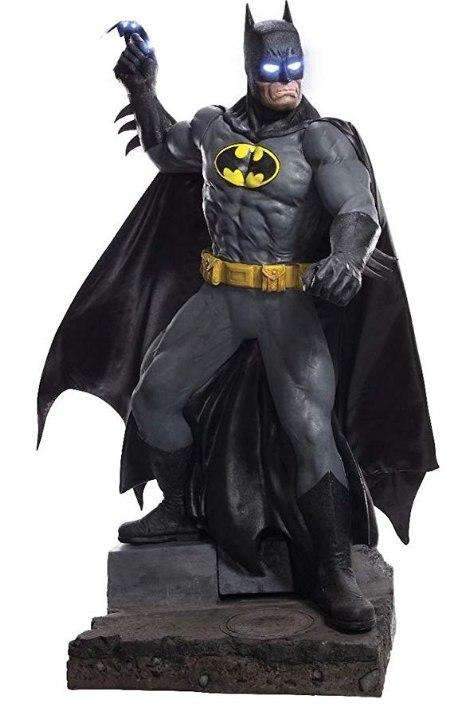 LM Treasures is a nice online store for items of décor. You can buy statues, sculptures and furniture from this website. They also have options for prop rental. So, if you are having a party and want something cool for the event, just rent it. They have a wonderful collection of life-size statues as well. This particular life-size Batman statue follows the character design from the comic book.

We see the black and grey costume with the yellow accents on the symbol and the belt. This is a really good life-size statue. You can see the amazing skills and craftsmanship on it. Everything looks amazing. Just look at the sculpting of the muscles on Batman. Every crease and folds look good and add a nice layer of detail to the statue.

One of the best things about the character design of Batman is his intimidating look. This statue makes Batman look like he is ready to be the symbol that scares of bad people. The company added nice little details on this statue. For example, the Batarang on his hands lights up and so does his eyes.

This glowing effect will look awesome in low-light settings. This statue is 7 feet tall and you can watch a video of it on the website to understand how it actually looks. The cost of this statue is $1800. The stock is less so if you want it to hurry up! 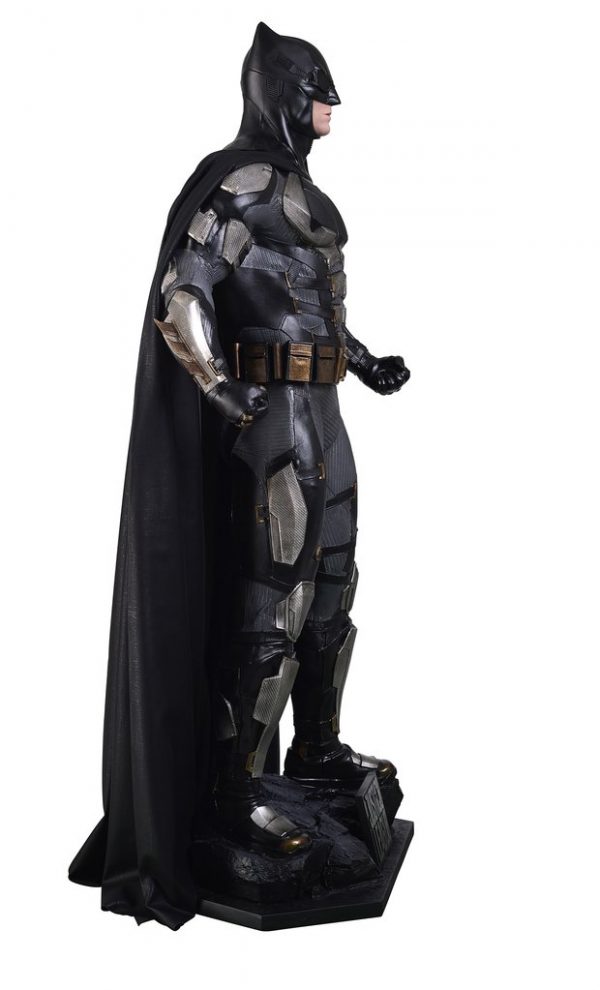 Even though the original design of the Batman looks clean and you can sort of perceiving the mobility of Bruce Wayne in that suit, it is sometimes good to see a more armouresque design. After all, some situations demand you to wear something bulkier and more protective.

One of the best parts about Zach Snyder’s Batman Design is the fact that it looks close to the comic book design. The suit does not look too bulky and seems as if one could wear and move in it. But we saw another design in the beginning part of the Justice League movie. We see Batman wearing a different suit. One which suits his situation.

This suit looks kind of awesome as well. You need a better protective gear sometimes and when you have billions of dollars you can afford it. We like the design of this suit. It looks like armour but does not look too over the top. The design choices that the artist makes are on point.

There is a cover on the eye. This is a cool-looking life-size Batman statue and it is 87 inches tall including the base. The base resembles a sort of rocky terrain and has the Justice League logo on it.

The cost of this statue is $4997 and it will ship in three boxes. These statues are made to order which is why they will take some time to reach you. If you like the tactical suit from the last big-screen appearance of Batman, give this one a consideration. 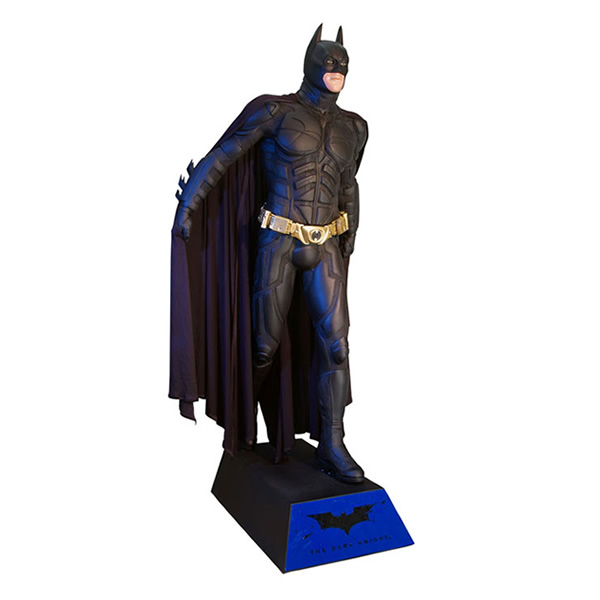 If you ask anyone what their favourite Batman movie is, a lot of them will mention The Dark Knight. One of the reasons Batman is so popular right now is because of Christopher Nolan’s trilogy. Before Batman Begins the only popular movie we saw was the one with Clooney in it.

In the movie, we see Batman as a goofy character. Dancing around and handing Batman credit cards for some reason. It reminds you of the series featuring Adam West. Nolan was able to take the concept and characterization of Batman, give it his own touch. He is a master storyteller who tells a captivating story.

This is a 7 feet and 4 inches tall statue including the base. The base features the batman logo and the movie title. This is an officially licensed statue and is made of fibreglass. The price of the statue is $3699 and you can purchase it in secretcompassonline.com.

Batman will always be one of the most popular superhero characters. As long as creators keep reinventing him he will grow. One of the best things about fictional characters is that they can grow and adapt to the current time while still staying true to their original concept. If you are a fan of Batman then owning a life-size Batman statue can be amazing.

Since these purchases are costly we sincerely hope you get the best product for yourself. You can also check out our list on life-size Superman statue, life-size Hulk statue etc. Happy shopping!

Spider-Man is one of the most recognizable superheroes all over the world. Your friendly n…