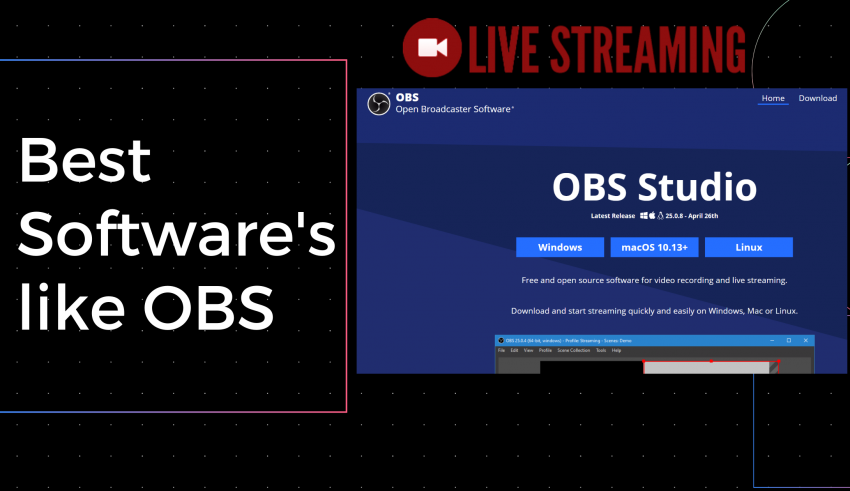 Open Broadcast Software (OBS) is a free and open-source cross-platform for streaming and recording programs written in C, C++ language. OBS id is available for Microsoft Windows, Mac, and Linux.

It is available in 55 languages. It provides a real-time source and device capture, scene composition, encoding, recording, and broadcasting. Data is transmitted via RTMP and can be sent to any RTMP supporting websites such as YouTube, Twitch, and Facebook.

OBS is probably the most often choice for live streaming. But, now there are a lot more new software’s developed which will give you a better user experience and available with better features than OBS. Also, OBS files take more space in the CPU and are of the heavy size you cannot depend on OBS for lifetime. You must try these new Softwares and find the best one for you.

Here Is The List Of Top 9 Softwares That Can Successfully Replace Obs Studio:

StreamLabs OBS is a live streaming software owned by Logitech and developed in January 2018. It is an all in one application making streaming easy for everyone. It is available for Windows 10/8/7 and Mac operating systems. It is one of the best options for recording and streaming to twitch, YouTube, and Mixer.

It is free of cost, quick, reliable and trusted by many popular streamers such as Ninja,  Summit 1G, Lirik and Imaqtpie. It offers smart and game-specific encoding which leads to lower CPU usage. Most of the functions present in it are similar to OBS however a lot of functions are also unique from OBS.

Lightstream is a cloud based streaming software developed by Stu Grubbs in 2014. Cloud based software means that it takes sources from your PC but all the composition and encoding is done on Lightstream Servers. This will lead to less CPU usage but at the same time it will not Compromise with video quality.

This one is unique because it is  a browser based streaming platform. It supports all streaming related tools which are available in other streaming softwares. It is the best choice of beginners for open broadcast software. However if you are an advanced streamer and looking for a professional level software then this one will not fit for you.

Also Check: How to Grow Your YouTube Channel Organically

VMix is a live streaming and video mixing software developed by Studiocast PTY ltd. It is available in 9 languages and written in VB.NET language. This one is best for professional streamers. You can use this for both live stream and screen Recording.  Its latest version also supports 4K video format.

It is ideal for windows users who are looking to live stream as you get the best from VMix by using all its features. This software contains every aspect to make sure you can do everything with your stream. V Mix can be considered as the best flexible live streaming software for everyone.

If you love to live stream gaming videos but found it difficult to operate various software then this one is made for you. Wirecast is a live streaming software developed by Telestream in 2018.

It is written in C, C++ and Objective-C languages. You can do everything with your streams, create any type of content with a great quality and very easily. Its user interface is very easy to operate. It is available for Mac and Windows. It is the best one for streaming games, webcasts, live videos and eSports.

It is a paid software however a trial version is also available. It comes in two versions: Studio and Pro, and both are of professional level. Wirecast studio costs $695 and Wirecast Pro costs $995.

Camtasia is a video creating software developed by Techsmith in 2002 works on operating systems Windows and Mac. It is the best alternative for OBS if your main purpose of using broadcasting software is to record screen then Camtasia is perfect choice for you. It is paid software but its prices are binge worthy.

It offers a pro level editing function that makes it a complete package for screen recording purpose. It has every tool you need regarding putting text, zooming, trimming, highlighting and the videos will always be created in high quality. You can easily save them to a computer or share it with YouTube.

It is developed by Beepa Pty Ltd. And released in Feb 2013.  If you just want to record your gaming stream for fun or a causal user then Fraps is for you. It is easy to use and best suitable for the users with minimal needs with screen recording software.

It can be operate on Windows Operating system. You can record your video in any custom frame rate i.e. between 1 to 120 frames per second. It may appears to be lightweight and beginner’s option but still it is fairly powerful.

It has all basic features required to record any game streaming. If its developer add few updates in it then it will surely stand out among its competitors.

Developed by Nvidia Corp, Shadowplay is intended mainly for gamers. It is able to give a break to your CPU. It means if your computer’s processing is slow or you want to use your available processing power for another work then this is the best software for you. However it is free of cost but you have to purchase NVidia Graphics Card. It is a great tool for local recording.

Bandicam is a screen recording software package developed by Bandicam Company and released in 2009. It is able to record gameplay and screen recording all in a lightweight package. It is available in 50+ languages. You can record specific areas on a PC,

or can capture gameplay that use one of many common graphic technologies. This software can also record 4k video with a capture rate upto 120 frames per second. Bandicam allows for image capturing in BMP, PNG, and JPEG format.

This is all with the list of vest 9 alternatives for OBS. If you focus only on live streaming than Xsplit, StreamLabs OBS, VMix, Wirecast are the best ones for you. However, if your main focus is screen recording then Lightstream, Camtasia, Fraps, Nvidia Shadowplay, Bandicam is a good option.

If you wish to give less load to the CPU then Lightstream, Nvidia Shadowplay is a smart choice.Every software has its own features some of them are similar to others and some are unique.

Before deciding which one is perfect for you, first of all determine what you actually need from a software, what kind of features you want, then after go through them all and choose which one is best for you.

Why do people do what they do? What forces are behind their actions? If you know someone w…