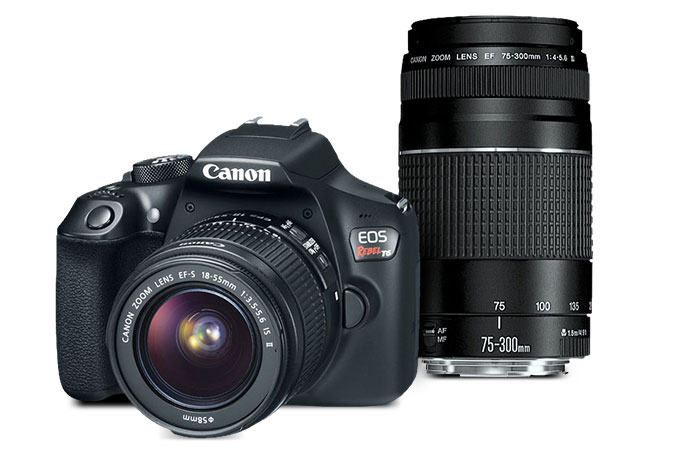 The features offered by the 1300D are pretty basic just as you would find in any entry-level DSLR. The major features of the Canon EOS 1300D are its 18 megapixels APS-C CMOS sensor, 9 autofocus points, max ISO of 12,800 and at a max shooting rate of 3fps.

The camera also sees the addition of WiFi and NFC which were missing in the 1200D. The main objective of the EOS 1300D is to appeal to photography beginners and first time DSLR users with its low price and ease of use.

If you are someone who had used or even seen the erstwhile 1200D then you can relate to the 1300D as well as design and build of the camera is almost identical. Design wise, just like any other entry-level DSLR, the Canon EOS 1300D is on the relatively small side for a DSLR, but it’s chunky enough to be satisfying for those upgrading from a compact camera. On top is the mode dial with which the user can shuffle between various shooting modes. Go towards the back of the camera and you will see a few buttons which are there for various camera functions. But the back is mostly occupied by the 920K dot 3-inch LCD screen which works well – bright and clear.

The Canon EOS 1300D comes with an optical viewfinder which offers reasonably bright and clear view of the scene outside. But on the negative side, it covers only 95% of the scene. But then some might argue that it is pretty normal for entry-level DSLRs and there is nothing wrong with that. But while shooting one needs to be careful that nothing unwanted creeps into the edge of the frame.

Wi-Fi and NFC is the big upgrade for this camera when comparing it to the 1200D. In order to use it, download the Canon Camera Connect App, which is available free on the App Store (iOS) or Google Play Store (Android).

The biggest disappointment of the Canon EOS 1300D is its limited number of AF points. With only 9 AF points to works with, users may feel a bit handicapped at times.

But whatever there is, the AF system works pretty well in most lighting conditions. But in low light, the camera struggles to focus. One advice that we can give to 1300D users is to use the central AF point in low lighting conditions since it is the cross type. AF speed of the EOS 1300D also depends on the lens you are using it with. Use it with a top-notch lens and it is as fast as a supersonic jet.

When it comes to image quality, the EOS 1300D has both positive and negatives about it. In bright lighting conditions where the ISO is kept low, images come out pretty good, But increase ISO above 400 and images get progressively noisier.

The Canon EOS 1300D is offered with two different kit lenses – EF S18-55mm IS II and 55-250mm IS II lens. Apart from these two you can pair the camera with the following lenses for the best results.