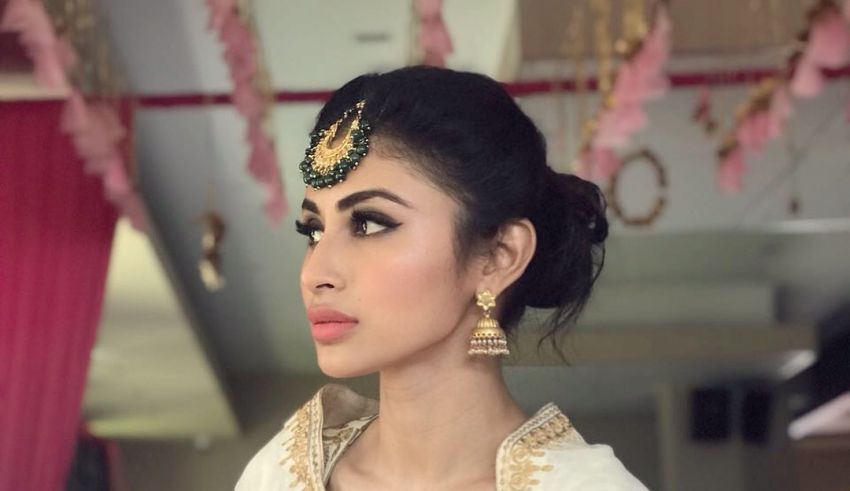 Mouni Roy turned the television industry topsy-turvy with her debut in Indian serial Kyunki Saas Bhai Kabhi Bahu Thi (2000-2008). Ever since then, she has starred in numerous famous shows and made her mark as a successful actress. In 2018, Mouni made her first Bollywood debut in Gold alongside Akshay Kumar. Gold proved to be a major breakthrough in Mouni’s career after which she has received a line of upcoming unique roles in some major movies. The actress has now got her hands full with a newfound fame and stardom and we just can’t wait to see her again on the big screen. Check out more about Mouni Roy below:

I believe in kindness. Also in mischief. Also in singing, especially when singing is not necessarily prescribed. Mary Oliver

Mouni was born on 28 September 1985 and as of today, she is 33 years of age. She was born in the town of Cooch Behar in West Bengal, India.

Mouni is around 5’5″ tall and weighs around 50 Kg. She has black hair and black eyes. As for her figure, Mouni shed a lot a weight for her role in Gold and couldn’t stop herself from flaunting her curves on social media. She is a fitness enthusiast and can be spotted at the gym frequently. Apart from this, Mouni keeps her fans updated with pictures from her frequent dance sessions with her trainer. What an exciting way to stay fit!

Mouni was born in a Hindu middle class Rajbanshi family. Her grandfather Shekhar Chandra Roy was a famous Jatra theatre artist. Her father Anil Roy was an office superintendent at the Cooch Behar Zilla Parishad and her mother Mukti Roy is a theatre artist. Mouni has a younger brother Mukhar Roy. Her idol is her father from whom she draws her inspiration. Mouni’s father passed away in June 2013.

Mouni completed her schooling from Kedriya Vidyalaya, Baburhat, Cooch Behar. She enrolled herself in Delhi University’s prestigious Miranda House from where she got her degree in English honours. She then went to Jamia Milia Islamia, New Delhi to pursue mass communication due to pressure from her parents but later dropped out to try her luck as an actress.

After Mouni came to Mumbai to pursue acting, she earned a very minor role as a background dancer in the song ‘Nahi Hona’ in the movie Run (2004). Success came her way finally in 2007 when she earned the role of Krishnatulsi in Ekta Kapoor’s Kyunki Saas Bhai Kabhi Bahu Thi. Her fame from the show earned her huge popularity and she was instantly signed as one of the contestants on the show Zara Nachke Dikha (2008) on STAR One. Mouni won the season 1 of the show along with Karishma Tanna and Jennifer Winget.

In the same year, Mouni appeared on TV serial Kasturi by Rishi Kapoor on Sun TV and played a small but recurring role of Shivani Sabbarwal. In 2009, Mouni participated in the Indian reality TV show Pati Patni aur Woh along with her then alleged boyfriend Gaurav Chopra. The show revolved around several celebrity couples whose day to day activities were shown on the television.

In 2011, Mouni starred in her first Punjabi movie Hero Hitler in Love where she played the love interest of the lead character, Hitler. Her major breakthrough came with lead role as Sati on the show Devon Ke Dev…Mahadev (2011-2014). Mouni’s performance on the show was thoroughly praised by the audience and she managed to entice everyone with her beautiful character portrayal of goddess Sati.

During the same time, Mouni also played the lead on the show Junoon-Aisi Nafrat Toh Kaisa Ishq. The show’s storyline revolved around the love-hate relationship of the lead characters, Meera (Mouni) and Prithvi (Aditya Redij).

In 2014, Mouni participated on the dance show Jhalak Dikhhla Jaa season 7 along with Punit Pathak on Colors channel. Mouni finished as a finalist and really made heads turn with her excellent dancing skills.

In 2015, Mouni made her comeback to Indian television with the lead in Ekta Kapoor’s Naagin season 1. The story of Naagin is about a female shape-shifitng serpent, Shivanya (Mouni) who avenges her parents’ death. The show went on to become one of the highest rated shows on Indian television at that time and Mouni’s vengeful character portrayal became an instant hit. Mouni continued her role in season 2 of the show.

In 2016, Mouni hosted the reality dance show So You Think You Can Dance with Rithvik Dhanjani on &TV. This was the first time Mouni hosted a show and she was praised for her spontaneous oratory skills. She then went on to voice for the role of Sita in the animated film Mahayodha Rama.

In 2018, Mouni starred in famous Bollywood movie Gold where she played the wife of Akshay Kumar. Her role as the Bengali bride of Tapan Das (Akshay Kumar) made her famous overnight and brought her under the scope of subsequent roles in Bollywood movies.

Mouni has confirmed that she’ll be seen in three movies next year which are anticipated to be big hits considering their hefty starcast. She will be seen in Karan Johar’s Brahmastra alongside Ranbir Kapoor, Alia Bhatt, and Amitabh Bachchan. She would also be seen in RAW- Romeo Akbar Walter opposite John Abraham and Made in China opposite Rajkumar Rao. The actress’ appearance on the big screen is highly awaited and we wish her all the luck!

Throughout her career, Mouni’s name has been associated with two of the biggies of Indian television. She was believed to be dating actor Gaurav Chopra after they were seen together on the show Pati Patni aur Woh in 2009. The two never spoke publicly about their relationship and believed in keeping mum. In 2016, Mouni made a guest appearance on the sets of Big Boss 10 to promote her item number in the film Tum Bin 2. While Mouni was seen thoroughly participating in everything on stage with Salman Khan, she deliberately chose to not go inside the house as Gaurav Chopra was one of the contestants.  Apparently she had requested the makers of the show to keep her away from interacting with Chopra. While it has been several years since they broke up but the two of them continue to be bitter for each other. Chopra recently got married to Hitisha Cheranda in Delhi who is a fashion consultant with Vogue India.

After her alleged relationship was over with Gaurav, Mouni was believed to be dating her Devon Ke Dev…Mahadev co-star Mohit Raina. According to sources, Mohit and Mouni was more than “just friends.” Although none of them publicly spoke about their relationship status but were seen together at a lot of social gatherings. When Mouni was asked about the rumours of her and Raina dating, she replied, “I don’t want to answer any personal questions.”

At the beginning of 2018 Mohit stated in an interview that him and Mouni never dated and it was just a mislead assumption by people. He even stated that he would choose to keep mum about his personal life like always and the media should respect his privacy. Around the same time Mouni stated in an interview, “I am single and have been so for a long time. Mohit and I are not even friends.” Well, are they telling the truth or is this a deliberate move on their part to cover up their past, we’d never know!

While this is only the beginning for the stunning actress, she has a long journey of success ahead of her. We wish the actress a very good luck for all her future endeavours!