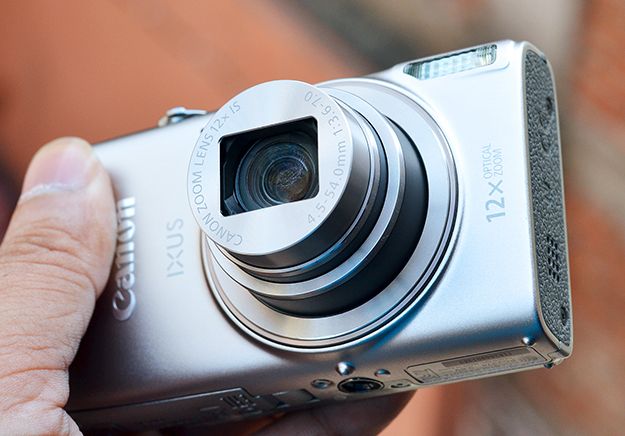 Canon IXUS 285 HS is a lightweight and compact 20.2-megapixel point and shoot camera which has an advanced Digic 4+ processor which improves the image processing quality. The ½.3 inch CMOS sensor captures high-quality images. It’s powerful 12x optical power zoom feature can get you closer to your subject and the digital zoom plus technology can extend the zooming capability up to 48x.

The camera supports aperture range from f3.6 to f10, an ISO sensitivity of 80 to 1600, a 3-inch wide LCD monitor with approximately 461k dot resolution and a full HD video recording with the resolution of 1280×720 and 640×480 pixels. The real highlight and most convenient feature of this camera is its Wi-Fi and NFC network connectivity.

The IXUS 285 HS can be connected to any smartphone by means of Wi-Fi or NFC, which will allow you to share your multimedia files on social networking sites at a high-speed. This adds a lot of relevance to the compact camera segment, which had started to face a bit of redundancy off-late.

The camera looks like any other digital camera in the market. It is sleek and compact enough to fit in your trouser pocket. It measures 99.6×58.0x22.8mm and weighs around 147g with battery and memory card, making it easy to carry around. It has a premium metal looking body that makes it a little sturdy against minor bumps and hits. Canon has used a layer of rubber on the flap over various ports on the left side which gives a nice feel to the camera.

It is powered by 3.6v, 800mAh battery and can shoot 160 shots when fully charged. The front panel has a 12x optical zoom lens, which is neatly tucked into the body itself and protrudes only once the camera turned on. The rear panel features 3-inch LCD screen which gives a decent display sense of image sharpness upon focus. Besides this, the camera UI also shows a longer view of the area in the focus.

There are decent numbers of buttons including a standard four-way navigational pad, with each directional key controlling a specific function. The left key controls macro focusing, right key controls flash mode, up controls exposure compensation while the down key changes the display mode. The top panel features on/off button, shutter release and a switch for moving between the three different exposure modes. The camera lacks the feature of containing an internal memory, but it supports external memory cards such as SD/SDHC/SDXC memory cards.

The Canon IXUS 285 HS features 16 megapixel CMOS sensor for better performance in low light and a Digic 4+ processor. Its 12x optical zoom covers the 35mm equivalent range of 25-300mm. it comes with optical image stabilization, which is necessary at high zoom levels. The camera has series of multiple options like low-light performance, smart shutter, full HD with the resolution of 1280×720 pixels, automatic Wi-Fi transfer and NFC.

The auto zoom function detects the number of faces in the scene and can adjust zoom settings. There is a number of shooting modes available on the device from portrait to smart shutter, miniature effect to monochrome, super vivid to fish-eye effect & more. But the most attractive features are hybrid auto and creative shot.

The hybrid auto creates a short video clip two seconds before the shutter button is pressed and combines all the clips for an overview of your day. The creative shot automatically takes a set of five different photos each with a different digital filter applied to it. It supports built-in flash, self-timer, autofocus, red-eye reduction, face detection, image stabilization, high-speed USB, eco mode and supports external memory devices. The camera performs best in proper daylight condition and its performance is a tad bit better than a high-end phone like the iPhone 6 or the Galaxy S7.

The camera shoots well at low ISOs and holds rather well up to ISO 800. In macro mode, the focusing distance ranges between 1cm and 50cm works only when fully zoomed out. Despite the flaws in image quality, at Rs.11000 the Canon IXUS 285HS will still give you good results and more flexibility.