December 04, 2021
Home Travel 10 Most Beautiful Waterfalls in India that You Must See Before You Die 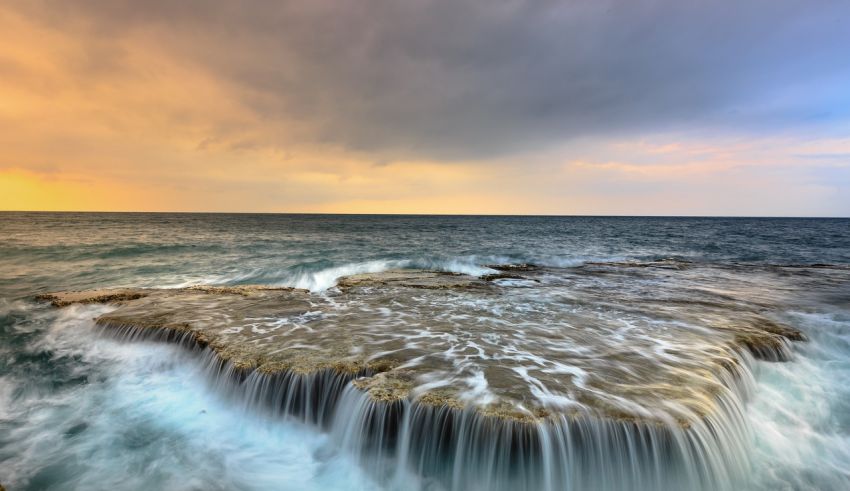 Waterfalls are a rare commodity for us. Since the dawn of the ‘Urban Era’, our cosmopolitan cities have advanced a lot, acquired many amenities in the processes- such as intertwining roads, towering buildings, bridges, railroads and more. We’ve harvested ourselves a concrete jungle. But one thing that seems to have been left behind in even the biggest metropolitan cities is the natural touch.

The essence of Nature itself has left our cities; leaving us with a hollow steel shell. But ever so often, we get a glimpse into the wanderlust virgin beauty of Nature that can so easily take our breath away.

And amongst Mother Nature’s most exquisite and sublime sights is a Waterfall! India is home to some of the most stunning waterfalls in the world. And with the coming monsoons, nature’s beauty is unparalleled.

The rivers cascade through the rocks nonchalantly, the mountains come alive to the song of birds and beasts alike, the valleys get decorated with sparkling waterfalls, magnificent lakes, lush green trees and the pastures are speckled with vibrant flowers.

We have compiled a comprehensive list of some of the biggest, most voluptuous and elegant waterfalls to be found in our country.
So, as a nature lover if you wish to step away from the humdrum of civilization and take a break from your mundane routine, then this list will certainly add some color to your life. Without much further ado, let’s dive right into this!

Here is the list of Top 10 Beautiful Waterfalls to visit in India: 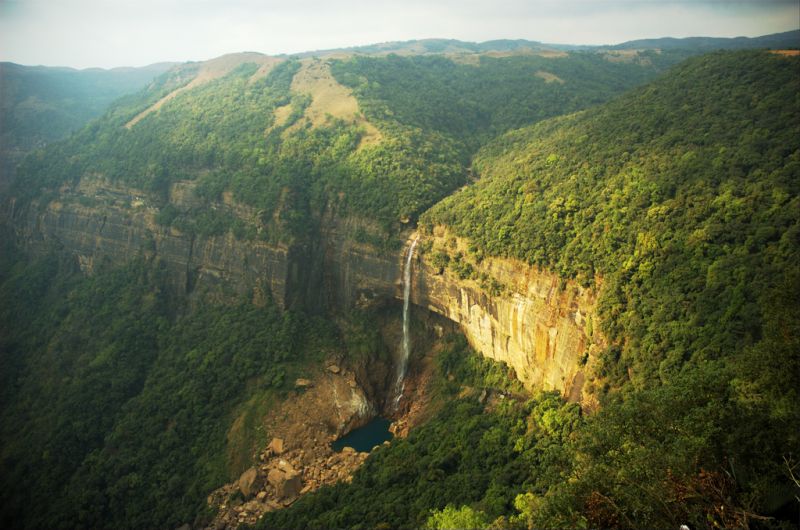 Starting this list is one of the most scenic landscapes in all of India. The Nohkalikai Falls of Meghalaya is the tallest plunge in India with a height of 1,115 ft. Located in the evergreen city of Cherrapunji- one of the wettest places on Earth- this panoramic sight has a dark and gruesome legend behind it.

The story goes that a woman named Ka Likai remarried a man after the death of her first husband. Soon the second husband grew jealous of the affection that Likai was showing to her daughter from the first marriage. Not being able to come to terms with this, he killed the infant, cooked her meat and fed it to his unsuspecting wife.

When Likai found out what she had done, horrified and driven by grief, she ran to the edge of the waterfall and threw herself off the cliff. The falls thus came to be called Nohkalikai after her.

Get Direction to Nohkalikai Falls 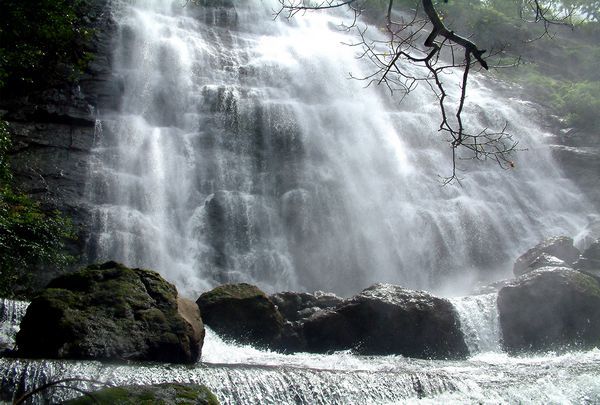 Up next are this gigantic monolith. The Kunchikal Waterfall found in Karnataka is India’s Largest waterfall. With an astounding height of 455 meters, this magnificent spectacle is Asia’s second highest waterfall. This waterfall is formed by the Varahi river and is situated near Agumbe in the Shimoga district of the state.

This region receives a lot of rainfall all year round, and the heavy downpour is only augmented come the Monsoon months. The force of the waterfall plummeted thousands of feet is so loud that people almost a mile away can hear the water crashing down at the vortex below.

From afar, the naked eye can’t see anything but a thundering pillar of white, engulfed in a hypnotic mist, making it a majestic sight to behold!
Kayannush Guard

Get Direction to Kunchikal Falls 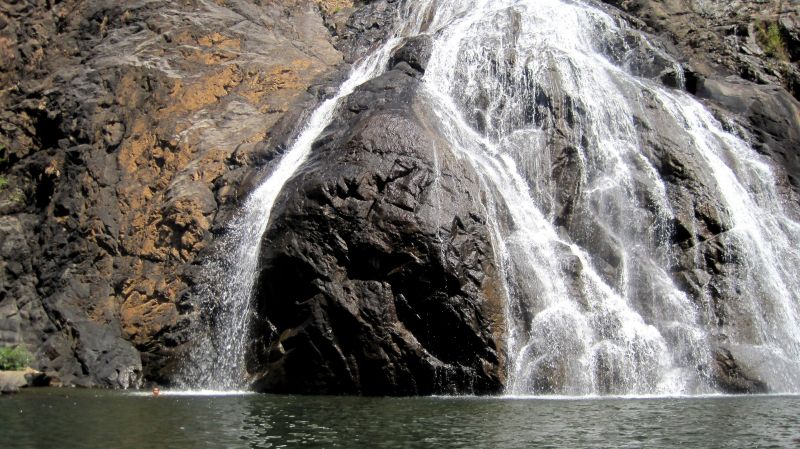 Goa can be called the unofficial hub for the average adolescent Indian. There is no denying the excitement of the state. Goa has a lot to offer, from cosy beachside shacks to the raving nightlife, to sumptuous seafood cuisines and even a thriving football loving populous.

It is an amalgamation of the traditional Portuguese orthodoxy and the post-modern next generation values of the youth, creating a fine blend. But one of the non-mainstream places to visit in Goa is this remarkable waterfall, just a few kilometres from the city of Panaji.

The name of the falls translates to “Sea of Milk”; coined due to the transformation of the watercolour from blue to white as it crashes to the bottom. The fall is the 5th largest in India, measuring 310 meters, and are also in the list of Top 100 Waterfalls of the World.

Get Direction to Dudhsagar Waterfall 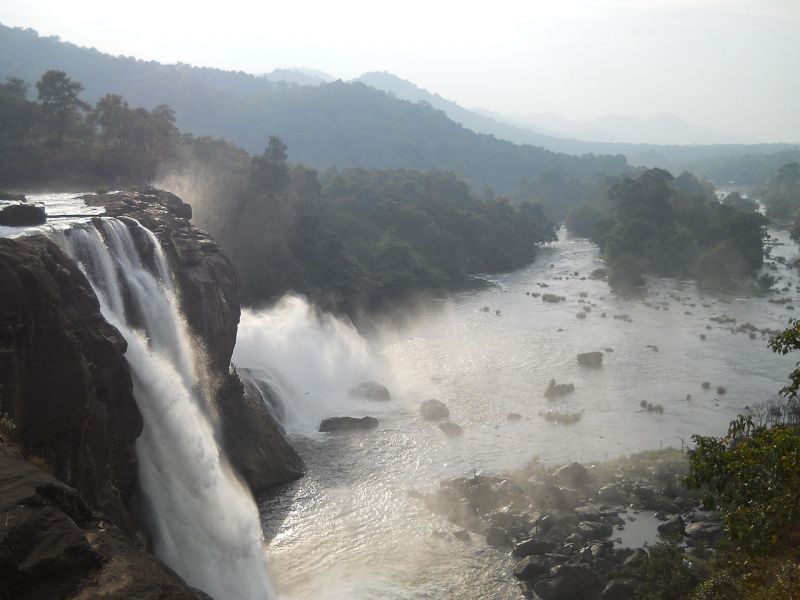 The Athirappilly Waterfall of Karnataka is often dubbed as the Niagara Falls of India. The surprising part is that this is a relatively small fall in terms of height, at just 24 meters tall. However, it is the monstrous width of this waterfall that makes it a mind-boggling sight.

In fact, from afar, this waterfall looks like a tongue of lava flowing down gently. This waterfall is located in the Athirappilly Panchayath district and also showcases a variety of abundant wildlife. One such example is the endangered great Hornbill.

Get Direction to Athirappilly Waterfall 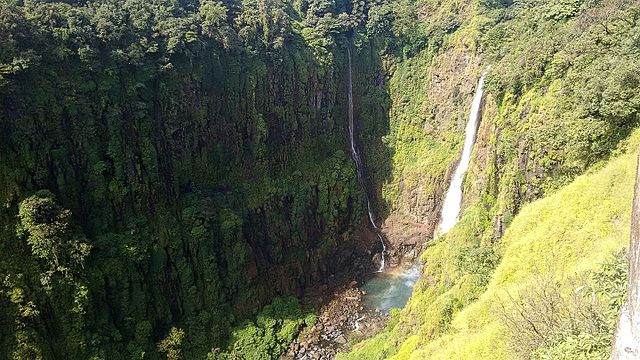 Nestled 20 kilometres from the city of Satara, on the edge of Konkan in Maharashtra, deep in the village of Thosegharh is this spectacular waterfall.

While this site is usually difficult to reach because of how far away from civilization it is, the journey is worth the prize at the end! What makes this sight so intriguing is this is an amalgamation of several
Kayannush Guard
waterfalls- some being only 15 meters tall, while the others are gigantic at 500 meters. The surrounding area also offers quiet and peaceful setting making it ideal for relaxing and spending an afternoon close to nature as surrounding hills are thickly covered with forests. Because of it is a highly popular tourist attraction, it has been nicknamed The Pride of Maharashtra!

Get Direction to Thosegharh Waterfall 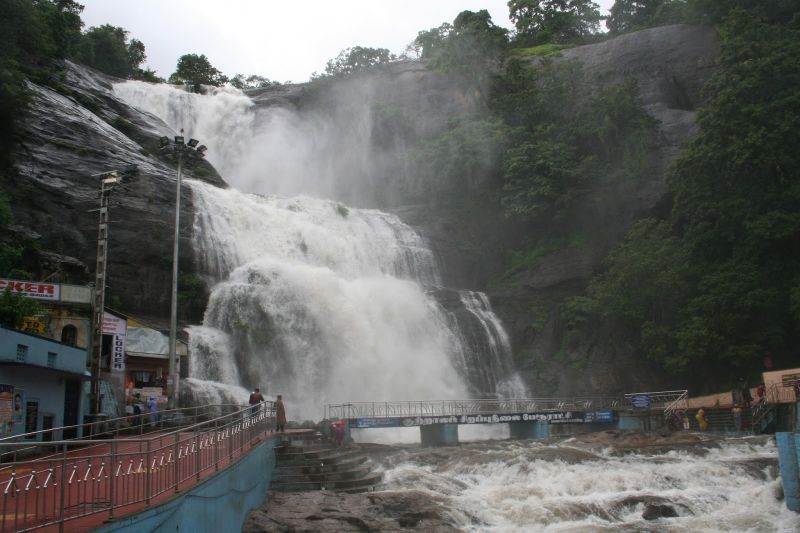 Measuring up to 180 meters high, the Courtallam Waterfall is not only Tamil Nadu’s largest waterfall, but also one of the tallest all over India. Situated south of a small hamlet of Panchayat, this waterfall has quickly become the selling point for the locals residing there.

The best time to go there would be the monsoons, where falls become larger and more ferocious. The waterfalls in steps resulting in a truly stunning view.

Tourists can reach vortex of the falls at the bottom through a jetty built right across the river below the falls. But for you to be able to witness the whole waterfall, it is best to observe from a distance, due to its size and magnitude.

Get Direction to Courtallam Waterfall

The Talakona Waterfall is a colossal waterfall located in the Sri Venkateshwara National Park in the Chittoor District of Andhra Pradesh. The zenith of this waterfall is an astounding 270 meters above the ground. As the column of water falls from this height, it acts like a prism when the sunlight hits it- creating a rainbow right across the middle of it.

This forms for a breathtaking sight that has allured tourists from all over the globe to witness. The sound of the water crashing below is deafening, rendering conversations moot.

This won’t be a problem, however, as engulfing these Falls are an abundance of wildflowers and butterflies and other species of Flora and Fauna found nowhere else in India but here! Visitors can steal a moment of self-indulgence and retrospection here and be one with nature.

The waterfall is also renowned for the Temple of Lord Siddheswara Swami that has been erected next to it. It is often a tradition to place your head in front of God first before going over to see His majestic natural creation.
Kayannush Guard

Get Direction to Talakona Waterfall

Check Also: The Most Exciting Water Parks In Goa For The Ultimate Recreation 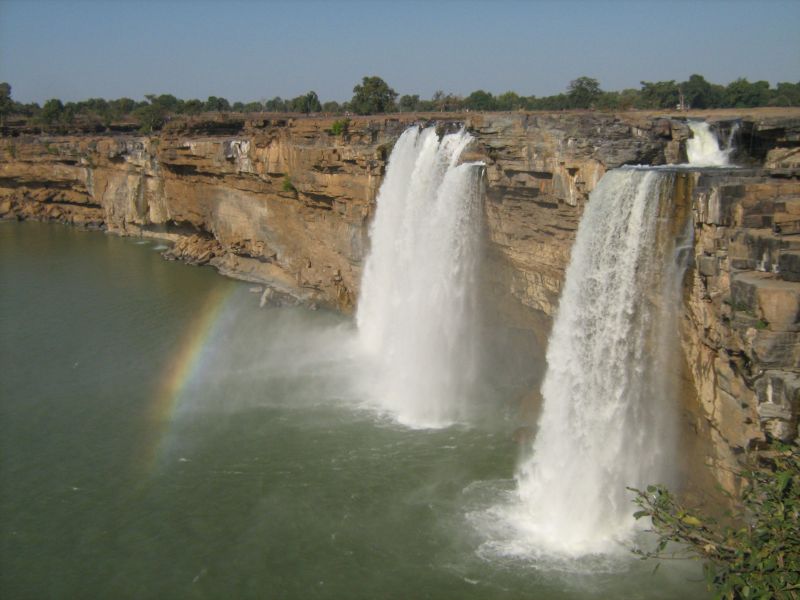 The Chitrakoot Waterfall of Chhattisgarh is a truly sublime sight. Located in Jagdalpur, in the Basta District of Chhattisgarh, this waterfall’s magnetic beauty attracts thousands of tourists every year to come and watch this spectacle unfold.

One of the most standard sights here is the daily rainbow that forms as the water crashes down into the river. But it is not only the beauty of these falls that make it so special- it is also the bizarre phenomenon associated with it. During the drier seasons, this is one of India’s smallest falls, as the water trickles down from one of the lower exits in a steady stream.

However, come the monsoons, the floodgates open up and the waterfalls encase the entire rock face, crashing down from a height of almost 200 meters. The girth of the waterfall itself is almost as much as it’s height- at 180 meters; also making it one of India’s widest waterfalls as well!.

Get Direction to Chitrakot Waterfall 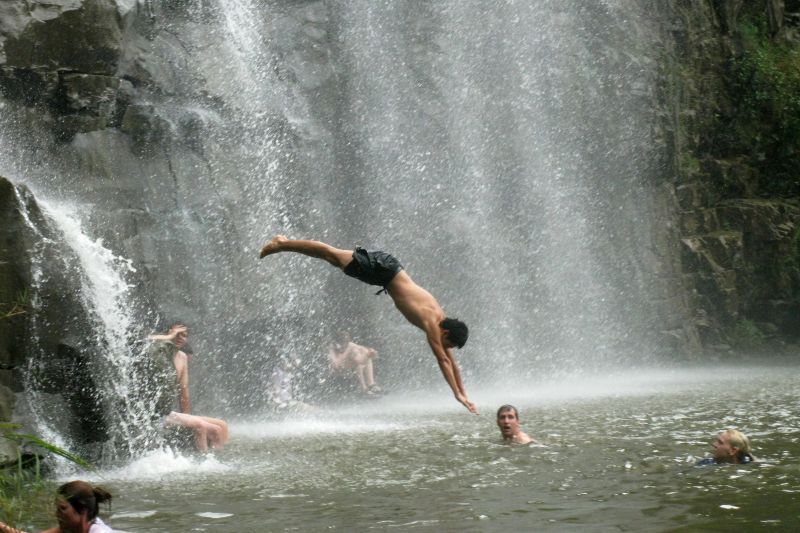 One of the most charming waterfalls of India, the Bhimlat Falls are a majestic sight to behold. A delight among the desert land of Rajasthan, these falls are not bereft of a bit of history either. Legend has it that the Bhimlat waterfall was created by none other than Bheem to quench the thirst of the Pandavas while they were on Canvas.

However, historical facts reveal that these falls were a consequence of the heavy earthquake that struck Rajasthan in the 8th Century. This waterfall is also called The Melodious Falls because of the dreamy scenery surrounding it.

This wonderful waterfall makes perfect destination to go to for a romantic getaway! One of this massive waterfall’s lower end streams drops from a height of 60 meters, where visitors can even go and stand under; basking in the rigorous flow of water.

Scattered along the banks of this fall are also some eateries and small bistros leading up to the main bazaar. After having enjoyed the panoramic beauty of the falls, tourists can also try out the local ‘Dal Bade’ of Rajasthan to end a perfect day.

Get Direction to Bhimlat Falls 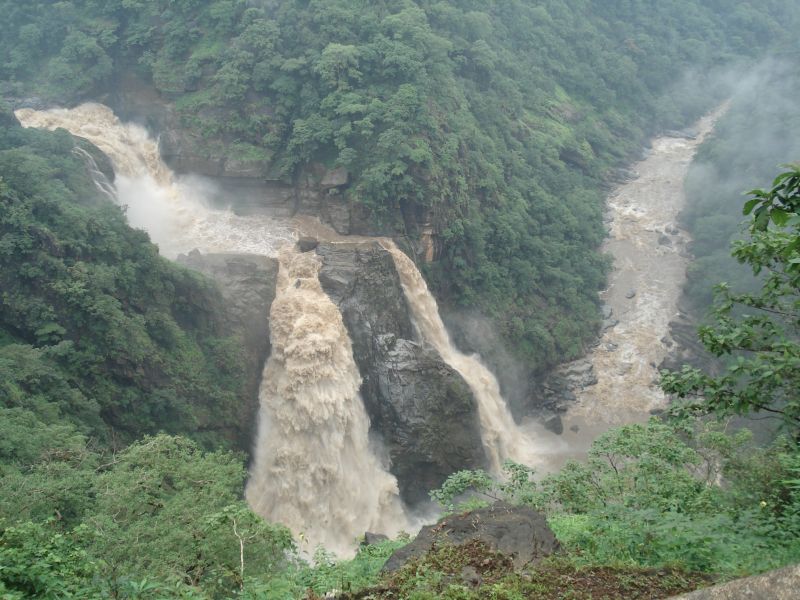 And coming to the end of this list is perhaps one of the most glorious and opulent waterfalls in India. The Magod Falls’ lavish beauty leaves tourists gawking (and muttering ‘My God!’).

Formed by the river Bedti, this waterfall rises 220 meters off the ground, 17 kilometres from the town of Yellapur. Magod lies amidst the thick evergreen woods; thereby giving it the name The Jewel of the Woods.

The best time to savour the beauty of this glorious waterfall is during the monsoon season, where the whole rainforest comes to life. Visitors can even trek up the mountain right opposite the falls, and perched atop they can have a splendid view of the entire waterfall. This is a famous picnic spot for tourists!

Get Direction to Magod Falls

So, there you have it! 10 of the biggest and most flamboyant waterfalls in India. You can visit these natural wonders which are rightly called the Tears from Heaven and escape the troubles of your daily life. A relaxing vacation will help you reconnect with nature, and maybe by the end of your trip…

You would have reconnected with yourself as well!.