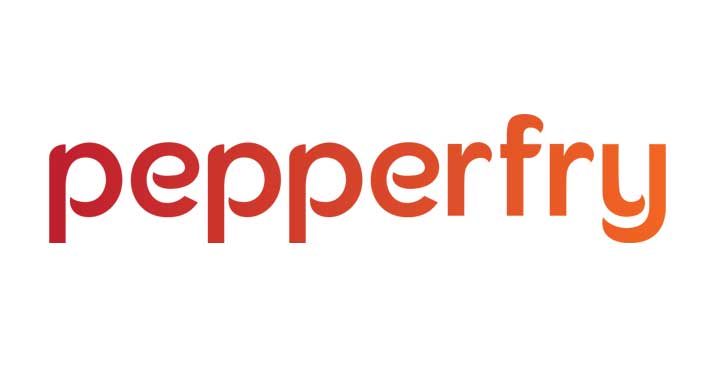 Co-founded in 2011 by Ambareesh Murty and Ashish Shah, Pepperfry is India´s most-funded startup in the furniture e-tailing segment. It is an online furniture and home decor store that has shaped the industry to a large extent, by being the first option for buying furniture for the urban youth. Catering to 500 cities, more than three million customers have made purchases from over 10,000 merchants via Pepperfry.

It initially started with categories such as home, lifestyle and fashion, but now specialises in furniture and home products on its e-commerce marketplace platform.

They have raised a total of $160 million so far from its investors. This heavy funding makes Pepperfry better positioned to compete with its direct rivals such as Urban Ladder as well as horizontal e-commerce players such as Flipkart and Amazon which have been focussing on their furniture business. The funding will be used to grow its logistics and service network and expand the footprint of Pepperfry Studios, its physical concept stores from 6 cities to 20. Pepper fry owns 17 fulfillment hubs and a delivery fleet of over 400 vehicles.

Pepperfry has competition in companies such as IKEA, Livspace, Woodenstreet, Homefuly, furniture rental startup Furlenco are all establishing themselves in the sector as well as horizontal players like Snapdeal with their furniture category.

However, Pepperfry is an exceptional brand that is vertical-focused with a differentiated, profitable business model. They are well positioned as the market leader in the next wave of market expansion. It snags 50 percent share of the market, earning Rs 1,000 crore in sales in the last fiscal year. It aims to triple this by March 2018.

Pepperfry aims to be India´s largest online furniture store by the end of the year, with a focused mission to help 20 million customers create beautiful homes by 2020.

We would like to hear about your shopping experiences and reviews about Pepperfry.

12 Reviews From Our Community

As the industry leader in the upcoming wave of market expansion, they are well situated. pool light repair winter park

I would like to work for this furniture company while bitlife is a student at the architectural university, but I'm not sure if I'm ready to be hired just yet. For me, the topic of work ethics is delicate. In addition, I have homework assignments and face several challenges before getting hired. When you're a student, you have so many goals and challenges...

Don't worry. You will manage everything and have success with your architectural dreams. Work ethic is a value that we can assimilate easily. You have to check more information about it, and maybe you can read some free papers or research about quality employers. It is important to find good resources like https://paperap.com/free-papers/work-ethic/ for inspiring and learning reliable information. Like you, I was a student who passed step-by-step over all the difficulties. My father's work ethic was my example. Therefore, everything is possible and can be changed due to good motivation.

I am a student at the architecture university and would work for this furniture company, but I am not sure I am ready to hire. Work ethic is a sensitive subject for me. Moreover, I have homework tasks and have to deal with many obstacles until hiring. So many dreams and problems when being a student...

They are well positioned as the market leader in the next wave of market expansion. Escondido Concrete And Masonry Pros

How to Retrieve Deleted Text Messages

If you have accidentally deleted a message folder on your Android device, you can still retrieve it later. However, you may have to perform a few extra steps to recover SMS text messages. Some of these steps may even require the user to manually backup their data. This is because not all Android phones automatically back up their data. Therefore, recovering these files might be difficult if you haven't backed up your device previously. Here is some info at celltrackingapps.com about how to find old text messages. What about pepperfry? Shit company.

I ordered a small value item and to my dismay discovered that the actual order service time is at the outer limit of the range (approximately 10 to 15 days after placing of the order) mentioned by them while placing order. In most of the websites even though such a range is mentioned, the product is supplied much earlier. But not in case of this website which informed me that the goods will arrive only on the last day mentioned in the order placing screen. When i requested them to cancel the order, twice, I received a stock word to word same reply both times, hiding behind the website policy of no cancellations no returns. There are hundreds of websites doing online business just like this site and none of them have such spacious argument like the one they have. All of them have a policy of order cancellation any time before the shipment and even returns after the supply – not only in case of defects but even in case the customer is not satisfied with the quality or any other aspect of the supply. What this site does not understand is that it is an online platform and the customer has not actually checked the goods nor has he inspected the same. All he has are the words and photographs on the site which in most cases are not conclusive or reliable. In spite of such a limitation, the customer is willing to go for online shopping because in almost all cases there is a very good cancellation and return policy. It is really surprising that this website is hiding behind the policy for the inefficiency and deficient service on its part. Such a policy is not going to lead them anywhere in this competitive market. Me for sure, is not going to ever visit this website, nor buy from it and for sure I am going to put adverse reviews and worst possible ranking for them wherever I can. It is solely up to this organisation as too how it looks at its customers and also its future because the customer are future.

The worst online experience i ever had or will have. we ordered dinning table from pepper fry, just after one day of installation from carpenter chair got broke. Luckily by god grace my husband sitting on chair didnt get injured because of support of wall. Immediately i raised return request , Can you imagine these pepper fry stupid customer care idiots mailed us "This is wear and tear case so cant be considered as return product. We called these idiots multiple times and told we are ready to pay more please replace at least chairs because its not safe to sit on them. I got the same answer from these idiots. Can anybody make me understand how a product (furniture) can be used in one day by customer and make it fail. What kind of disgusting policies these people have to cheat people. It really disgraceful. I warned them i have to take juridical action, they told they know the consequences. Please if some one can suggest whom to approach. whether consumer forum would be the right place? Its not about few bugs, its about our rights and about their FRAUD market. i really appreciate amazon and flipkart in this regard, at least they provide quality product

Was slightly slow on delivery

Had ordered ‘fashion jewelry’ from their website, seeing how reasonable the prices were. Honestly, I was expecting them to have cheaply priced ones but that didn't turn out to be true. These were actually quite good for their price (I did expect certain pieces to be cheaper than the others). Variety not be an issue. They have earrings (which I ordered), hair clips, bracelets, necklaces, etc. You won't run out of good options to pick in each category. Was slightly slow on delivery...for me. So I cannot say if it's for you. Otherwise, full satisfaction...5/5!!!!

Had very bad expe. Why is things so expensive? I expect they be cheaper but not getting why is priced so much. Dadnt liek the furniture also, not much you get for payment of large amount like 50 thousand.

They shown one color and mentioned another color. Ordered by seeing the product color in the list and got different color and fabric also not good quality. Everytime they are saying about return policy which they shelf not clear. After that Pepperfry on arrogance mode denying for return. Order No. 304531409 They need lesson.

I placed an order for 24 plates on 30th March, I got the delivery on 18th April that is after 20 days. I called pepper fry to help me with the return and the customer service person tells me once sold it cannot be returned. they dont have a return policy unless it is damaged. I told him that the product is not as per what i expected and also it was delayed by 20 days so i had to purchase it from somewhere else as i needed it early. He has blankly refused to take return and when i told him i will take this to consumer court, he in return is telling me no use coz they will just take your complaint and close the case. I have been forced to keep a product that i do not want. Such ridiculous company...I will never ever recommend anyone to purchase from pepperfry, coz if you did and you didnt like the product once its delivery they will not take it back and you will be stuck with the product. Great way of fooling people and making money.

Recent Questions and Answers on Pepperfry