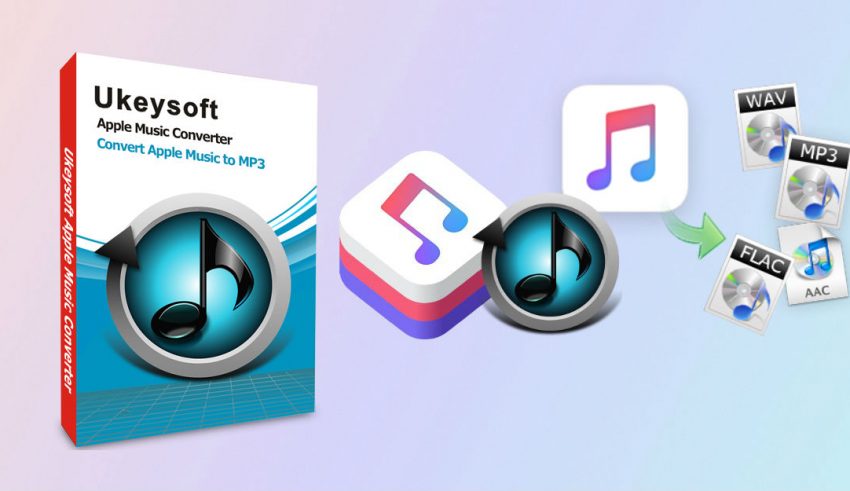 Apple Music is streaming music service, Apple Music subscriber can download the app for other devices like iPhone, iPad, Android phone, and the Apple TV. You can access the service via the iTunes app for Windows or Mac computer, and your Apple Music subscription will work via Sonos and Amazon’s Echo family of smart speakers. But, Apple Music is protected by DRM, even if we have paid for Apple Music, we can not still play it in another device, like MP3 player, iPod Nano, PS4, Xbox, Android TV and other unauthorized device.

Worse, we can’t keep Apple Music songs forever after canceling subscription, although we have downloaded the songs, because we don’t really own Apple Music tracks, since songs downloaded from Apple Music are encoded in DRM M4P format that can’t be played on MP3 player or other multiple portable devices and players.

Why do we need the Apple music converter?

Do you want to remove DRM from Apple Music tracks? Looking for a way to convert Apple Music to MP3 without spoiling your sound experience? Don’t worry. UkeySoft has got you. 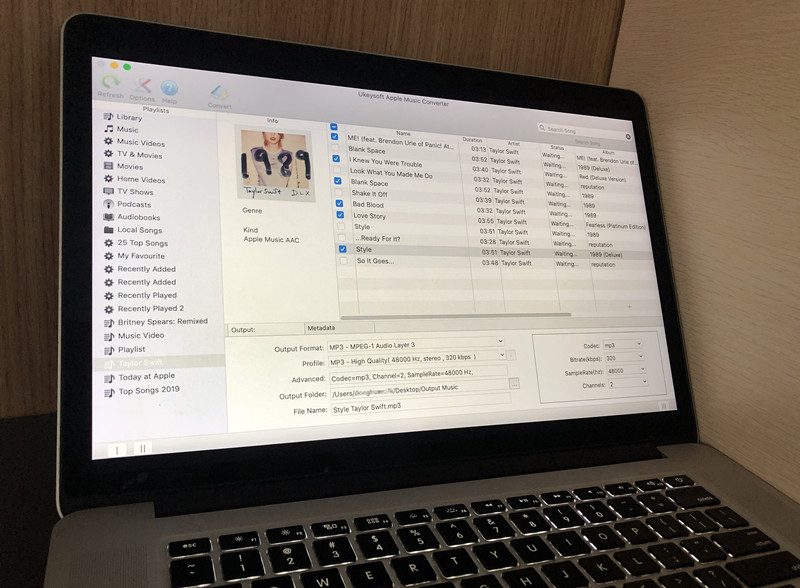 As one of the most premium and popular Apple Music conversion software, with one of the highest quality and options for up to 16 times the regular conversion speed, UkeySoft Apple Music Converter has ensured a state of the art experience for all of its users by preserving ID tags, metadata information, album artwork and the original audio quality of downloaded files when you convert Apple Music to mp3.

UkeySoft Apple Music Converter is a Apple Music downloader application that facilitates the online streaming music downloading and format conversion of audio files without slowing down the process, and deterioration of sound quality. This application removes DRM from Apple music files. It is a premium and reliable application that is very widely used to convert Apple Music songs and iTunes M4P songs into common audio formats, like MP3, M4A, AC3, AAC, FLAC, AU, etc, you will found that UkeySoft Apple Music Converter is different with other generic audio converters and audio recorders, it can read and save music metadata, such as the song title, artist name, album name, genre or album artwork after conversion.

In addition, it can also be used as an audiobook converter, you can use this application to convert Audible AAX/AA audiobooks and iTunes M4A/M4B audiobooks to MP3, M4A, etc, it can preserve Audiobook chapter information after audiobook to M4A conversion.

A leading pioneer in the field of successful, and zero rates of bad quality, UkeySoft Apple Music Converter has quickly created a big name for itself by surpassing all previously leading music converters. It has proved that quality is what makes or breaks your brands and has constantly worked in pushing its limits to be the best. Though there may be a few nitty-gritties that can be upgraded and made better, UkeySoft has taken every feedback and worked towards it constructively, making it one of the best in the market.

One of the main problems with apple music converters is that you can only play the converted audio on a few authorized devices.

Due to the DRM being of a locked nature, less a paid subscription is availed, cancellation of your subscription does lead to restriction of the availability of any transferred or converted songs.

This can be of high inconvenience to users who have used an Apple music converter in the past, only to face the disappointment of restriction of downloaded content. 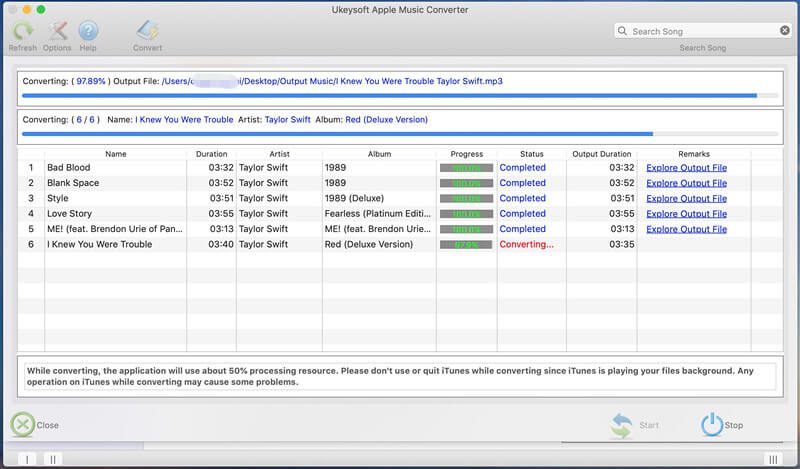 These are the problematic areas of music conversion wherein UkeySoft comes into action. This software is unique in a way that it eliminates all DRM and is able to convert Apple Music into MP3 of non DRM format as well.

Due to this, sharing Apple Music files and offline listening to Apple Music songs on any device becomes so easy. UkeySoft Apple Music Converter is not only the best choice for the conversion of Apple Music to MP3 but also of all the audio files of iTunes. It is fairly easy for the user to use it.

The software can be used to extract audio from podcasts, audiobooks, iTunes M4V music videos, movies, and TV shows. This offers a varied range of output formats like MP3, AC3, M4A, AU, AIFF, MKA, FLAC, and M4R, it is currently the best and most sought after music conversion software in the market.

With speed 16 times than that of regular music converters, for Windows computer, and 1X conversion speed for Mac it retains 100% audio quality, which is very unlikely the other music converters and does not fall in their capacity of performance.

A tried and tested, a user-friendly supporter of Windows XP, 7, 8, 10, it is the first Apple Music converter that has a flawless sound effect and wide array of compatible devices.

UkeySoft User Guide: How to Convert Apple Music to MP3

There are both Mac and Windows versions of the UkeySoft Apple Music Converter. After launching UkeySoft, it will launch iTunes automatically and load all your iTunes media together with playlists.

Select a playlist in the left panel, and all the tracks in the playlist will be listed on the right panel, if you want to select all the songs in the playlist, please check the checkbox in the information bar of the top. 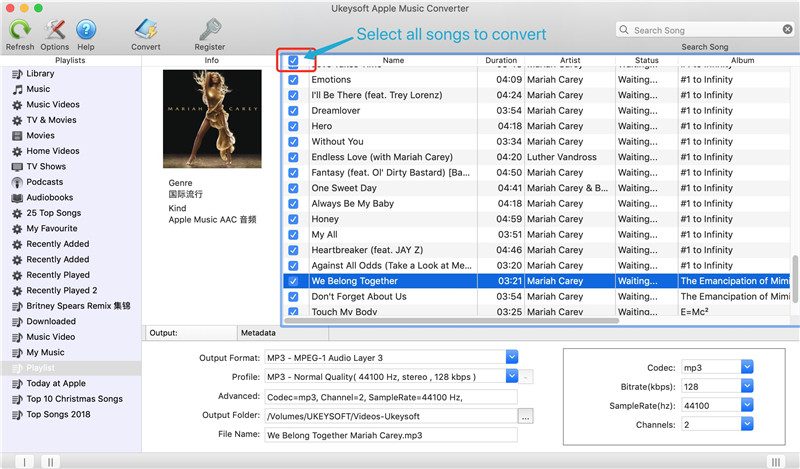 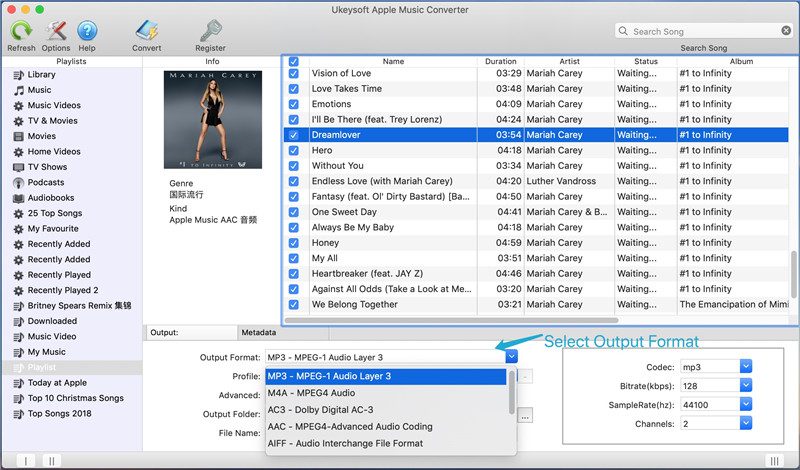 Click “Convert” button to start converting Apple Music or iTunes audio files to MP3 format, the UkeySoft will help you remove the DRM during Apple Music to MP3 conversion.

Once an Apple Music song has been successfully converted, you can click “Explore Output File” button to find the output songs, you can see those converted Apple Music files is MP3 format, which saving as local audio file for offline listening or sharing.

UkeySoft Apple Music Converter has proved to give one of the most reliable solutions solve Apple Music DRM restricts, it can bring free music and let’s us enjoy streaming music freely.

Keeping aside all other things, UkeySoft also can bring free audiobooks, videos, movies, if you want to remove DRM from iTunes movies, Spotify music and Audible/iTunes Audiobook, please go to UkeySoft official website and download more software. In a word, this Apple Music converter application can change the way you enjoy Apple Music.