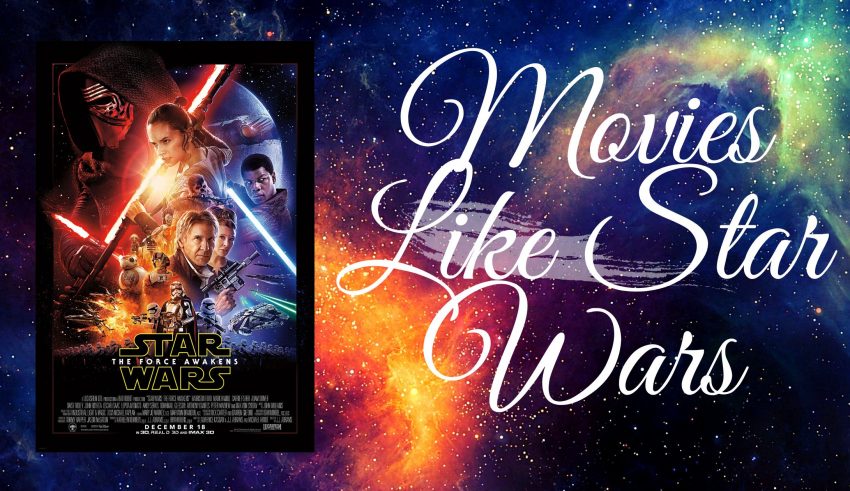 You’ve heard of Star Wars. There’s no way in the world you haven’t. Even if you happened to be someone who tries to stay away the series, there’s no way you have actually successfully stayed away from from the extremely popular franchise that birthed more than 10 movies, and generations of fans who know all about the little details, go to comic con, buy merchandise, and fully participate in the fictional universe that has been provided to them.

The Star Wars movies have played a huge role in making the genre what it is, taking over the baton from older classics and paving the way for future movies to run. Started first in 1977 with the first movie, it has become a worldwide pop culture phenomenon that we see references of absolutely everywhere.

And if you’re here, we’re guessing you love the series and want to get your hands on similar movies that can fuel your sci-fi fantasy! Well, lucky for you, we’ve put together a list of 10 movies you can watch after you’re done with the Star Wars series!

Number one, the Star Trek movies! Okay, before you yell at us for how they aren’t similar, we know they’re completely different stories and are fully aware of the heated debate between fans of Star Wars and Star Trek, fighting over which one is better. But what we cannot deny is that both of them are actually really great series that fit the bill of sci-fi, action, adventure, and fantasy perfectly!

The Star Trek: The Motion Picture was the first released in the series, and came out in 1979, only two years after the first Star Wars movie. The timeline of when they came out ensures that you have a similar vibe in the movies, with filming techniques and special effects being on the same level.

Star Trek also has more movies than Star Wars (13 to be exact), but if you’re not one for old cinema (which is completely alright. Old films are a very niche subject), the newer Star Trek movies, the trilogy to be exact, will be right up your alley! 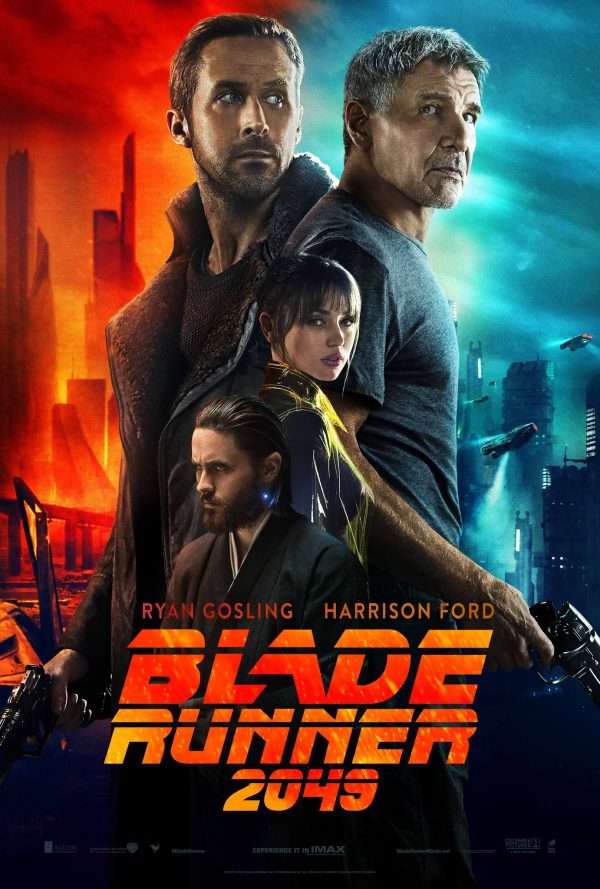 Next up on our list is Blade Runner, and basically the entire Blade Runner series. We’re going to mainly talk about the first one, starring Harrison Ford, which follows the story of Rick Deckard, and ex-policemen who finds himself on a mission to take out a group of violent androids. But the deeper he goes into his mission, the more he begins to question his own reality and identity.

If watching the legendary Harrison Ford (who also plays Han Solo, might we add) in his youth with this 1982 movie isn’t enough, the perfect blend of sci-fi, action, and a little bit of soul-searching should definitely win you over! This cult classic will be right up your alley if you like Star Wars and we definitely think you should add it to your watch lists!

Battle Beyond The Stars 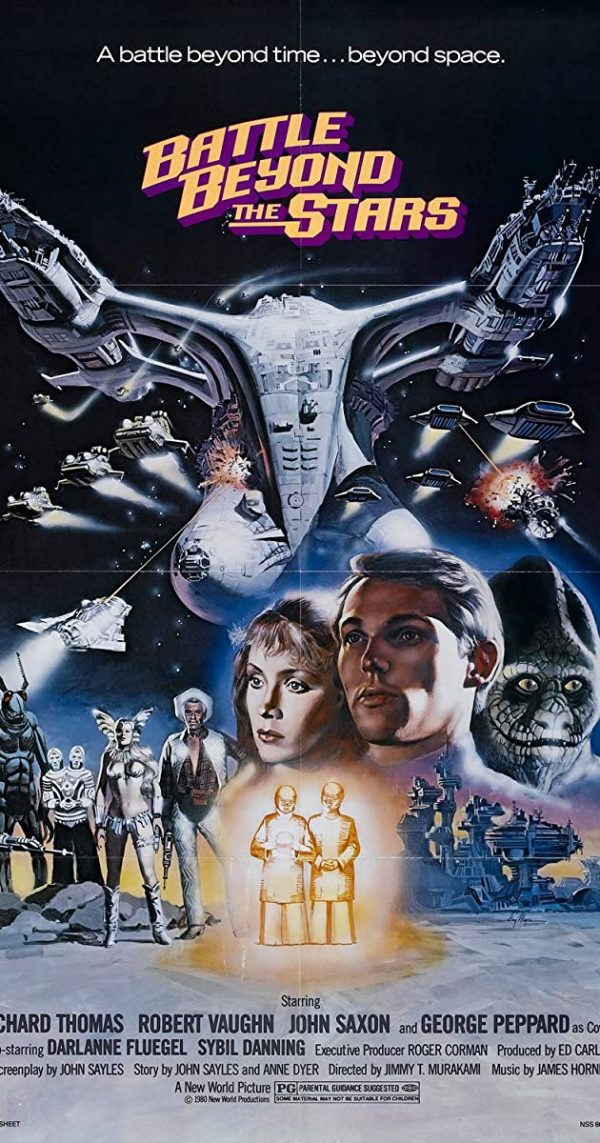 Next up on our list is Battle Beyond the Stars, and I mean, come on, the name literally is a synonym for Star Wars! This 1980 release is in many ways reminiscent of the Star Wars movie and follows the story of Shad, a farmer on a peaceful planet named Akir who assembles an army to fight against the forces that threaten to destroy his planet.

The retro design of the sets and costumes will remind you of Star Wars in many ways, and combining the sci-fi with adventure and action, Battle Beyond the Stars is sure to be one of those classic movies that you come back to watch every once in a while!

The fifth movie on our list is Dune, based on a novel of the same name by an American sci-fi author named Frank Herbert that was published in the 60s.

The 80’s adaptation of the book tells the story of a world set in the year 10191, where a spice called melange is the most valuable substance known in the universe (yes, a spice), and its only source is the desert planet Arrakis.

A royal decree happens to award the planet of Arrakis to Duke Leto Atreides and leaves out his bitter enemies, the Harkonnens. However, when the Harkonnens violently seize back their fiefdom, it is up to Paul, Leto’s son, to lead the natives of Arrakis in a battle for control of the planet and its spice. Whew, that was a large plot.

1984’s Dune was a huge hit, and so much so that we’re to expect a remake in 2020 that will star Timothee Chalamet and Zendaya among other great actors and we cannot be more excited!

Guardians Of The Galaxy 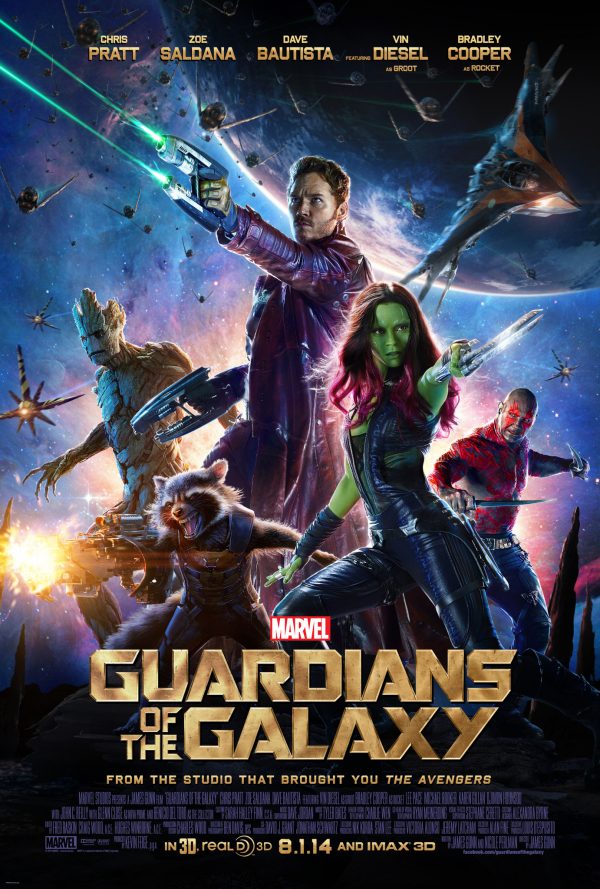 This Marvel creation is the next movie/series on our list! Star Wars fans more often than not also happen to be Marvel fans, so if you like Star Wars, you’ve probably already watched the Guardians of the Galaxy movies, and even if you’re not a fan of Star Wars, Marvel movies are big enough on their own such that no one can really escape or deny them!

But, if by any chance you’ve managed to stay away from Guardians of the Galaxy, we suggest you watch it immediately. The perfect mix of sci-fi, adventure, humor, and action, Guardians of the Galaxy will keep you entertained throughout, and I mean, who doesn’t like watching a rag-tag group of oddballs and misfits getting together to travel through space and have fun! 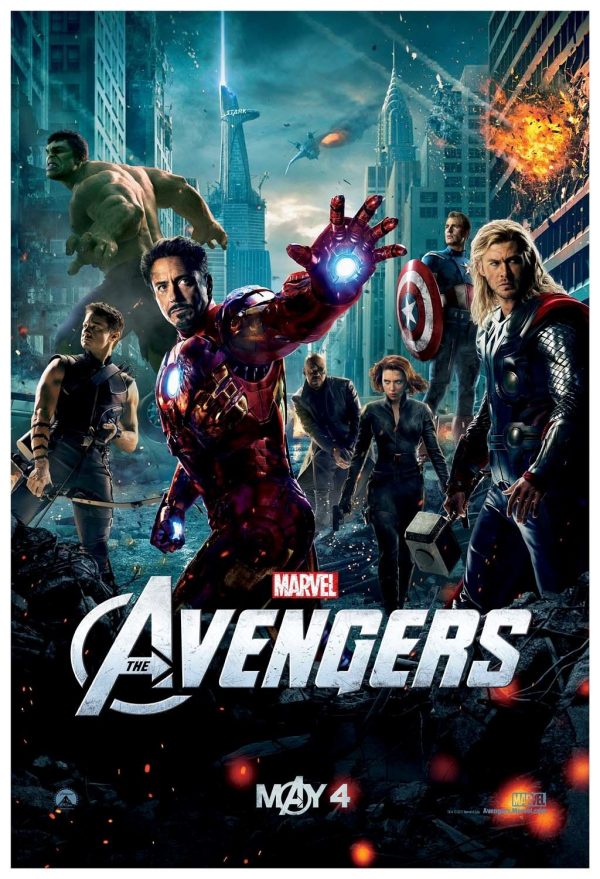 Next up on our list, we have yet another Marvel creation! The Avengers series is probably the most popular having spanned four main movies, along with side movies for a lot of the characters that in some way or the other play a role in the grand finale. What with Avengers:

The Endgame having been released recently enough to not let people move on yet, you’ve probably heard of enough spoilers at this point to know everything that happens in the movies. That is, of course, if you haven’t already watched the movie like five times yourself.

But even if you know all the goings-on, and don’t feel that interested to watch the series, for the love of Star Wars, please do! And with all the origin stories that you’ll have to watch as well, there’s a lot of material to keep you going and really get you involved! 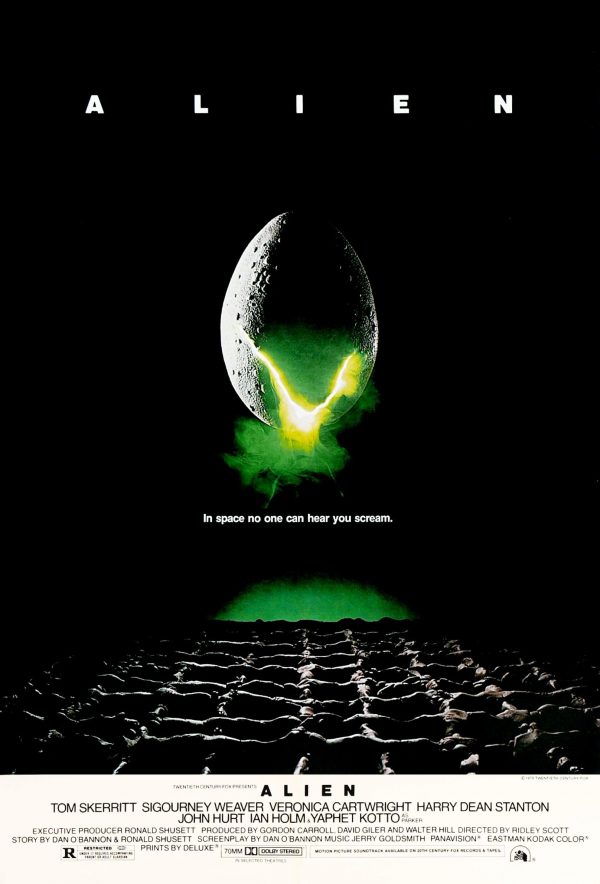 Next up we have this classic movie from 1979 that has since sparked five more popular movies in the series. But we’re going to talk about the first one, because it is, without a doubt, the most iconic. This sci-fi/horror film, starring Sigourney Weaver (who was also cast in Avatar. We love this woman) had people going crazy when it came out.

With a female lead in a sci-fi movie, Alien broke through a lot of barriers and really made women seem more than just damsels in distress who are only cast for the “pretty quotient”.

Alien follows the story of a spacecraft crew who receive distress signals from a nearby planet and go over to investigate. Things go horribly wrong when they realise that they’ve been attacked by an alien which later invades their ship. With great acting, lots of thrill scenes, and the horror quotient, this film makes for a perfect watch for anyone who loves sci-fi! 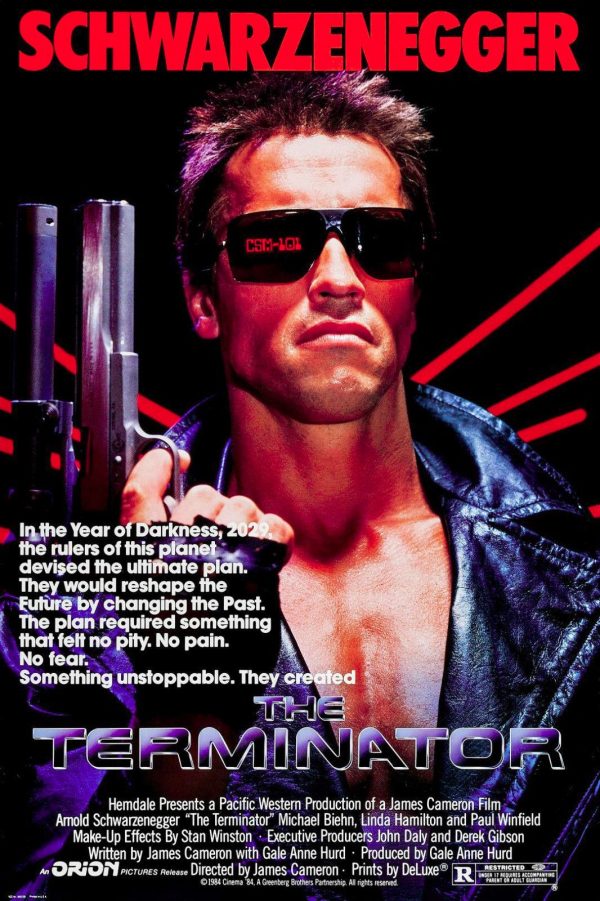 Next up, we bring you to The Terminator! Yet another classic, this one from the 80s, this 1984 release starring the supremely popular Arnold Schwarzenegger, tells the story of a cyborg assassin (yes very cool) who is sent back in time to kill Sarah, in a bid to stop her son who will end up waging a long war against his enemy in the future unless the course of history is altered.

If there’s the very minute chance that you haven’t crossed paths with this iconic movie, we’re sure you’ve seen the popular dialogue “I’ll be back” floating around the internet like a reaction image to multiple memes, and we suggest you watch the entire movie.

If the parallels in time make it sound like quite the topsy-turvy movie, don’t worry, it’s not very complicated, and anyway, if you are a Star Wars fan you probably have a degree in figuring out chronology and mapping out events through a confusing jumble of time! We’re sure you’ll end up thoroughly enjoying this movie with all the action scenes it has to offer!

Back To The Future 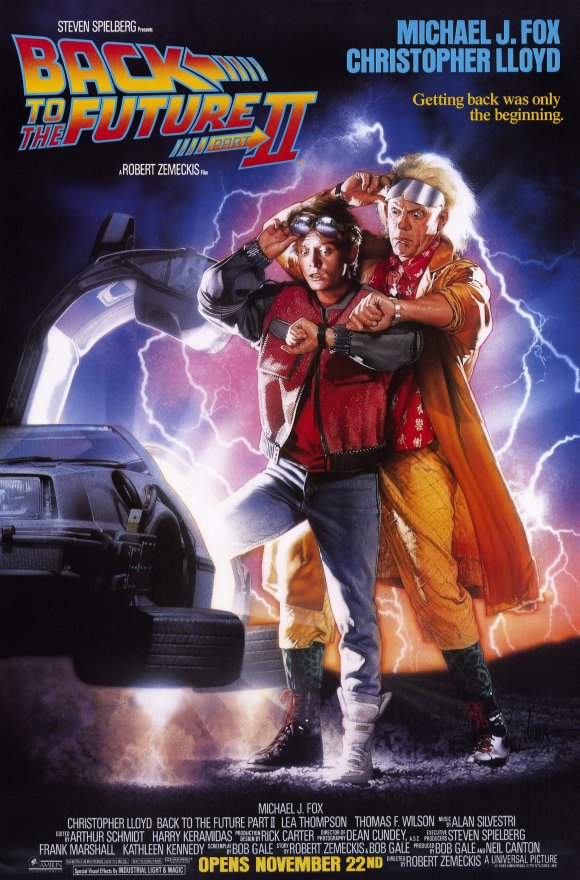 Ending our list with another movie that deals with time, we bring to you the cult classic, Back to the Future! Now this movie is one heck of a watch that combines sci-fi and comedy in the most entertaining way!

It follows the story of Marty, who travels back in time using an eccentric scientist’s time machine, but can’t come back to the future unless he makes his high-school-going parents fall in love! Back to the Future is one of those iconic movies that comes to mind when you try to think of time travel, and most people’s amateur knowledge of the subject comes from this movie!

This fun movie even inspired a Bollywood film named Action Replay, loosely based on the same storyline. While not your typical Star-Wars-like movie, we’re sure you’re going to enjoy this one!

That brings us to the end of our list! If you liked the recommendations, or if you feel like we missed out on some great ones, let us know because we’d love to hear from you!