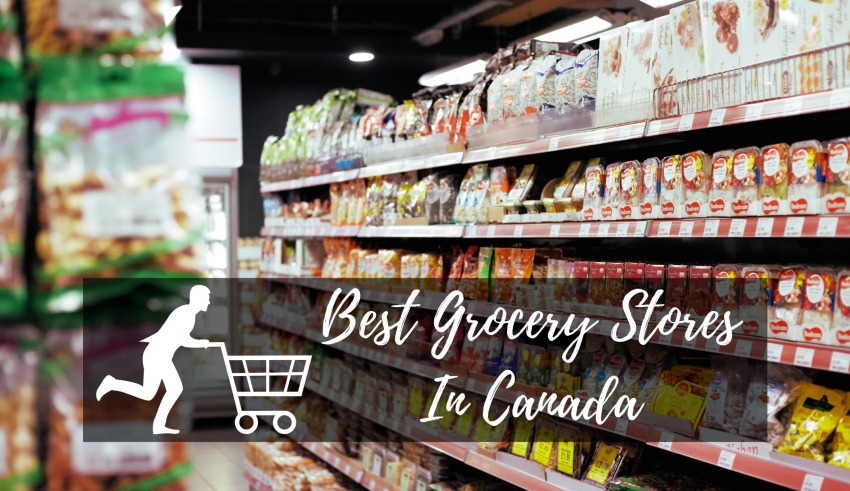 The choice to select the best grocery store is challenging because it is not just walking into one random store and purchasing the required products. Many other factors come into play while shopping from a grocer store. The choice to select a suitable grocery store is challenging as there are many factors that we need to consider – quality, price, variety, distance, customer service, availability of items, etc.

These new Canadians include landed immigrants, students coming to study, working professionals, and others. Starting afresh in an unknown, Therefore, it is necessary to be aware of what is available around. Don’t worry, we understand that other major problems need your attention like accommodation, job, etc. Amidst all of these, going to every grocery store to find out which one suits you the best is definitely not a good idea. Read this article and your flooding problem will vanish in no time.

Here’s a list of 10 Best Grocery Stores in Canada which you can go through to find the right one for you:

Loblaws is not only the best grocery stores in Canada but also the largest Canadian food retailer company. There is an uncountable number of stores that fall under the company’s level also known as President’s Choice Stores. From the lower-end no-frills shop to higher-end Fortino’s or mid-range Provigo, Atlantic Superstore, etc.

The products and services offered by the President’s Choice stores are our favorites. The big reason why it is preferred by everyone is that shoppers get to the bank with PC Financial and have a PC Financial World Elite MasterCard. It helps them to gain more PC Plus Reward Points. These PC Plus rewards have a great appeal to financially alert shoppers. Thus, the reason that these savings all add up results as a great influence on Canadian shoppers.

The company operates a private label program, which includes grocery and household items. The products which it deals in include general merchandise, clothing, baby products, pharmaceuticals, and a lot more. Some of the popular Loblaws Chain Stores across Canada include Zehrs Markets, Real Canadian Superstore, Fortino’s, No Frills, Maxi (Quebec), Provigo (Quebec), Metro Divisions, etc.

After Loblaws, the next grocery store on our list is Sobeys, the second-largest food retailer in Canada. The company was founded in 1907 by John William (J.W.) Sobey. Today, Sobeys Inc. has over 1,500+ stores operating all around Canada under various banners with its headquarters situated in Stellarton, Nova Scotia, Canada.

Empire company is the parent organization of the supermarket chain with many subsidiaries company spread across Canada which include FreshCo, Foodland, Farm Boy, Safeway, and many more. It is one of the most popular stores as it operates in all ten provinces. From early 2000, the main of the company is to deliver prover services, the convenience of customers, and ensure full customer satisfaction. Some of the products that you’ll get in these stores are dry goods, dairy, meats, frozen foods, etc.

After Loblaws and Sobeys, the third one on our list is Metro, which is also the third-largest grocery stores chains in Canada. Founded in 1947 by Rolland Jeanneau, today, the company operates as a retailer, manufacturer, franchisor, and distributor. Sobeys Inc. has over 950+ stores operating all around Canada under a variety of banners with its headquarters situated in Montreal, Canada. It has many subsidiaries such as Metro Plus, Food Basics, Super C, and a lot more.  Apart from these stores, Metro also operates or services a network of over 650+ drugstores.

The list of drugstores that comes under the company includes Drug Basics Banners, brunet, Jean Coutu, etc. Metro is one of those higher-end grocery stores that offer online coupons as well as rewards along with Air Miles. In most of the Metro stores, you’ll find a bakery, floral, shop, fish counter, food corner, and also an extensive line of health products. Some of the Metro stores are also now selling beer and have wine counters as well.

As the new name of the store is a bit lengthy, people often use the short-form RCSS or even just supermarket in place of the full name. So, next time whenever someone says the name RCSS, don’t get confused as now you know that it is nothing but the short form of Real Canadian Superstore. The parent company of RCSS is none other than Loblaw Companies Ltd., with its headquarters situated in Brampton, Canada.

If you are an old citizen of Canada or even if you are new, you must have heard the name NoFrills. It is one of the top companies out there in Canada, with more than 250 franchise stores spread in almost 9 provinces. NoFrills with the Loblaws Companies Ltd. as their parent organization was founded in the year 1978. It is the Loblaw Company Limited’s deep discount supermarket. The year it started was a tough period due to the prevailing high inflation. But, still, the company didn’t lose hope and adopted a discount price European model in the promotion strategy of its business.

This model included offering customers fresh products at the lowest price. The strategy was successful, the company was able to witness growth, and, soon, it became a ‘family name’ for Canadians. The customers are allowed to pack their groceries and even bring their own shopping bags. Even though there were few options available and the services offered were less in number, the supermarket store became the hot cake and remains the same till date.

It is one of the best Grocery Stores in Toronto. It earns revenue of approx. 1453.4 crores USD. To name a few of its subsidiaries – FGL Sports, Canadian Tire Financial Services, etc. It has witnessed amazing growth, with almost 487 stores around. If you are looking for quality products at affordable prices, then this one is worth checking out.

FreshCo Ltd., the Canadia supermarket company was founded in 2010 and the company was Sobey’s discount grocery store. Since its launch in 2010, the supermarket company has emerged in this industry and gained the trust of Canadians. Today, there are more than 100 FreshCo stores spread across Canada with its headquarters situated in Brampton, Canada.

Many people also call it the Canadian chain of deep discount supermarkets as the prices of products are super pocket-friendly and reasonable. The main of Sobey’s FresCo grocery stores was to offer customers fresh and the best quality ingredients that too at a very low price. The company believes that customers should not need to pay more for purchasing fresh items. Apart from all these, you’ll also get to find many new things in these grocery stores that you cannot even imagine exist.

Zeher Inc. is a part of the Loblaws and is one of the most popular Canadian supermarket chains in southern Ontario. Zehrs was founded in July 1950 by Emory Zehr, with headquarters situated in 1 Presidents Choice Circle; Brampton, Ontario, Canada. Loblaw Companies Ltd. purchased the supermarket company Zehrs in the mid-1970s.

Zehrs has now spread in 43 different locations in Canada in both small towns and large cities. In 2005, both Fortino supermarket company and Zehrs merged under the Loblaw banner. The supermarket company offers customers a wide range of products such as bakery, clothing, electronics, pharmacy,  and many more options. Hence, it is also called or named the ‘one-stop” store.

Fortino’s, a part of the Loblaw Companies Limited was founded in 1961 by was a steelworker from Italy, John Fortino. Today, the Canadian supermarket chain has more than 23 stores in Greater Toronto and Hamilton areas. In 1996, the supermarket chain launched a campaign or the concept of “Fortinos Adventure”.

This concept dealt with recreating the streetscape of Europe were at the front. There’s a small shop and as you go inside you get the style of an open market. It also consists of “The Butcher Block”, large-scale deli areas, and even markets for fresh produce. Since 2012, the company has gained popularity and has built a special place in the hearts of Canadians when it comes to grocery stores. In recent years, the company has witnessed huge success and growth in this industry.

London Drugs is a 100% Canadian-owned and mainly pharmacy that also deals in food items. Apart from food items, the London Drugs also offers health products, furniture, and homeware. If you are someone who lives out West or if you are a stacker, this is the best grocery store for you. London Drugs markets its own brand under different heads such as London Naturals, Tree Frog, London Premiere, LD Insurance, London Spa, TLD Computers, and many more. The company employs over 8000+ staff and is spread over 80 stores. The main focus of the company is to ensure full customer satisfaction.

Groceries are undoubtedly a huge part of our daily lives. It is not something that anyone will be willing to compromise on. Whether you stay alone or with a family, or whether you are a permanent resident or a foreigner, groceries for home are a must and you cannot afford to miss them.

Having proper knowledge about the daily lives of people and the places from where you can buy products of your daily requirements are a must to survive. Therefore, you must conclude which grocery store in Canada would be the best for you. It’ll ultimately help you in getting quality products at reasonable prices.

That’s why we have made the list of the 10 Best Grocery Stores in Canada so that you can cook, eat, relax, and most importantly, give more time to your other priorities. Therefore, whenever you get spare time. The first you should do is to learn about Canadian grocery stores ultimately. You’ll end up saving a lot of time and hundreds of dollars. We hope that our article helped you to find some of the best grocery stores around you in Canada. HAPPY SHOPPING!