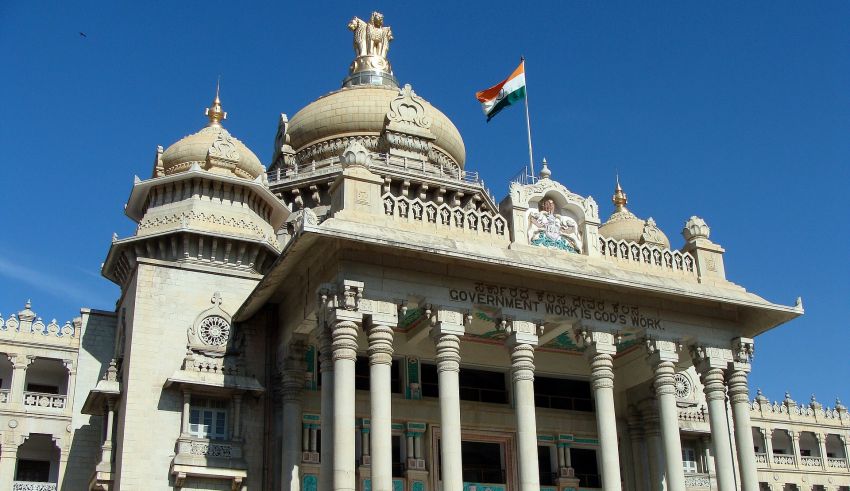 With Bangalore being one of the most popular metropolitan cities in India, there must definitely be a plethora of activities to explore. The city is now known as Bengaluru also has several monikers such as Pub Capital of India, Air Conditioned City, Silicon Valley of India, and City of Gardens.

An IT center, Bangalore has several exciting activities to explore with a well-combined mix of architecture, ethnicity, heritage, sanctity, and nature.

Here are the 10 best attractions of Bangalore: 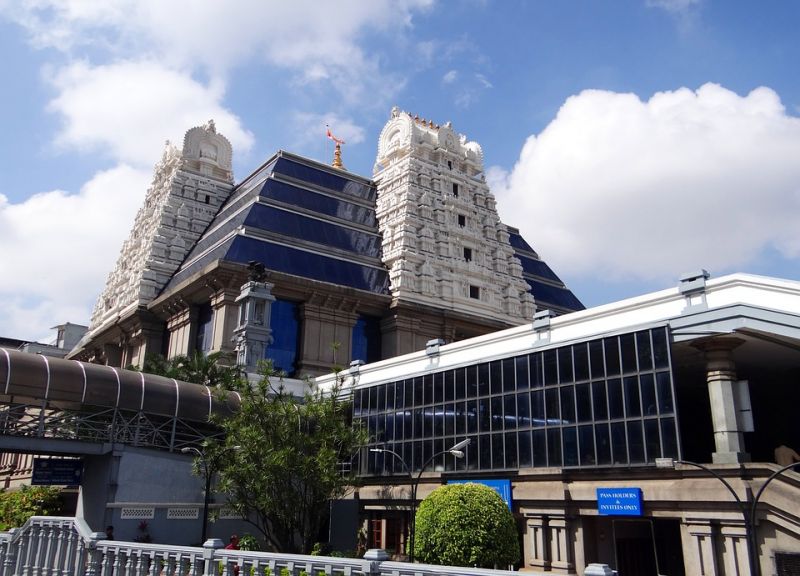 One of the largest ISKCON temples in the world, Bangalore’s ISKCON temple boasts incredible architecture and mesmerizing carvings that’ll carry you to a place of serenity.

Located on the Hare Krishna Hill at Rajajinagar in North Bangalore, the temple is devoted to Lord Krishna and Goddess Radha. The temple is a sight to behold at night. Several festivals are celebrated at the temple throughout the year in celebration of the divine presence.

Upon entering the building, you climb the stairs to reach the temple and with every step there resonates a chant of ‘Hare Rama, Hare Krishna’ from someone somewhere in the temple. There’s harmony in this chant which you’ll experience only on the site.

Get Direction to ISKCON Temple 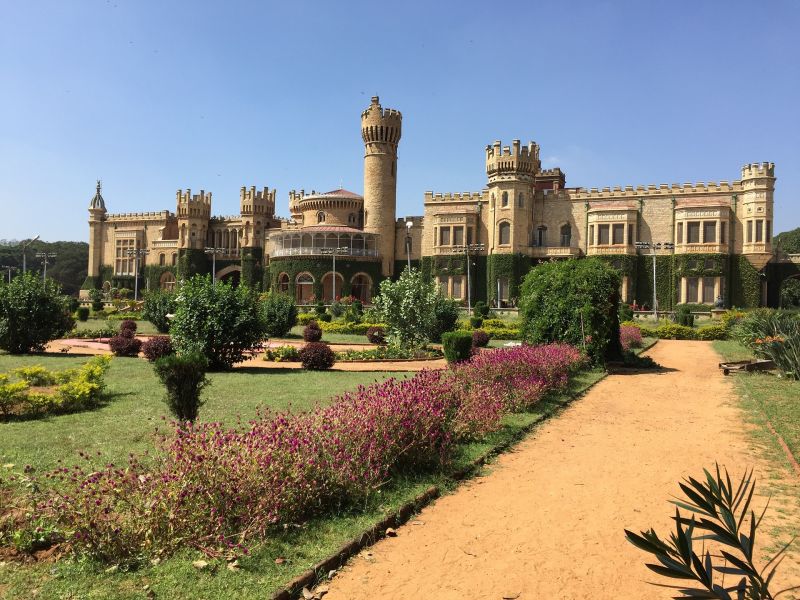 The Bangalore Palace brings you a taste of royalty with its sprawling Tudor architecture and its magnificence. Built-in 1887 by King Chamaraja Wadiyar, the palace is one of the older landmarks of Bangalore.

Located in an area originally owned by Rev. J. Garrett, the first Principal of the Central High School in Bangalore, the palace flaunts lavish and elegant luxury with its well-groomed gardens, gothic windows, impending towers, and graceful woodcarvings and is inspired by England’s Windsor Castle.

The palace resembles medieval castles of Normandy and England especially because of its vine-covered walls. You can explore the family history through memorabilia, photos, artifacts and portraits along with renowned 19th and 20th-century paintings by Raja Ravi Varma.

The venue also holds various concerts, exhibitions, and cultural programs, making it the cultural heritage of the city. Located at Palace Road, Vasanth Nagar, the palace can be easily reached through various public and private transport options.

Get Direction to Bangalore Palace

An art lover’s haven but also interesting enough for a leman. Housed in the century hold Manikyavelu Mansion, the gracious heritage building was transformed into an Art Gallery and exhibits world-class art including paintings by Raja Ravi Varma and Abanindranath Tagore (creator of the “Indian Society of Oriental Art”).

The National Gallery of Modern Art is one of three galleries, the other two being in Delhi and Mumbai. An additional block was added to the mansion so that is merges with the architecture and aesthetic of the Gallery. The Gallery showcases Indian art beginning from the early 18th century till modern times and stands as a cultural reservoir of the country.

You can explore an array of paintings, sculptures, graphic prints and initial photographs taken in India, an artistic expression of historical advancement in India. The exhibition includes Indian miniatures, colonial artists, Bengal School and post-independence artists who pioneered the birth of modern and post-modern art.

The gallery also hosts talks on art and culture and it open all days except Mondays from 10:00 am to 5:00 pm.

Get Direction to National Gallery of Modern Art 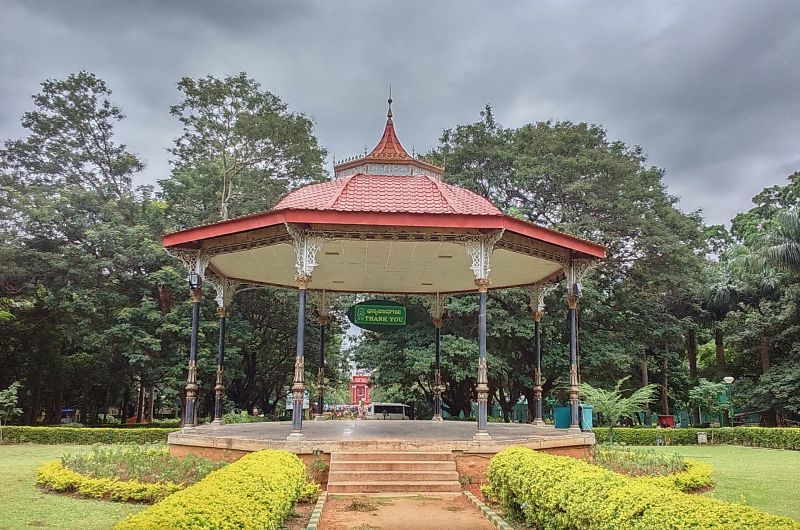 Bangalore isn’t called the ‘City of Gardens’ for no reason, Cubbon Park has its own sweet little contribution to it. Officially known as the Sri. Chamarajendra park, Cubbon Park is over 100 years old and perfect for a serene early morning or an evening stroll to explore history and nature together.

The park provides an ideal environment for walks and exercises yet remains historically remarkable. Located in the heart of the city on Kasturba Road, behind High Court of Karnataka, Ambedkar Veedhi, Sampangi Rama Nagar, the park lies in the Central Administrative Area of the city.

The park was founded in 1870 by Sri John Meade, then acting Commissioner of Mysore and the park was initially named “Meade’s Park” before being renamed Sri.

Chamarajendra Park in 1927. The main attractions of the park are the Queen Victoria statue, the King Edward VII statue and the statue of Major General Sir. Mark Cubbon. The park also brags of terrace gardens with a bandstand which was constructed during the early part of this century.

Beautiful lawns and sprawling trees adorn the garden all over, adding to the gorgeousness of the garden. The Ringwood circle, lotus pond, and bamboo grove nook are a sight to see.

Get Direction to Cubbon Park 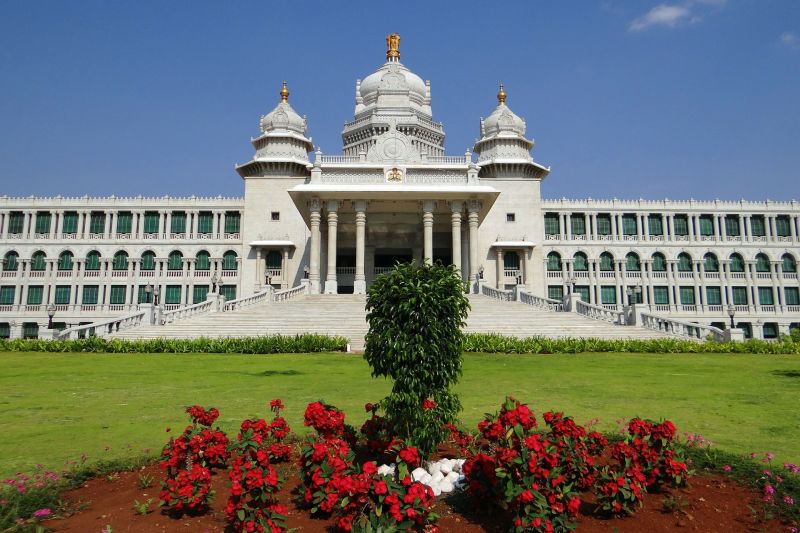 “Temple dedicated to the nation,” said Pandit Jawaharlal Nehru about the Vidhana Soudha while some called it “poetry in stone”. And one can’t be further than the truth. Known as the people’s palace, the Vidhana Soudha’s majesty is well known across the citizens of Bangalore.

Over 60 years old, the structure was built in 1956 and the conception and construction credit goes to Kengal Hanumanthaiah, the second Chief Minister of Karnataka. The architectural structure of the building displays neo-Dravidian style as well as classical European and Indo-Saracenic styles.

The architecture of the building is carefully orchestrated with its ornamental columns, capitals, and brackets resembling temple architecture. The design holds originality and isn’t just a copy of the past. The building is a ‘monument’ in its true sense as it evokes a feeling of awe upon gazing.

Sadly, it isn’t open for public viewing but is a sight to see at night.

Get Direction to Vidhana Soudha 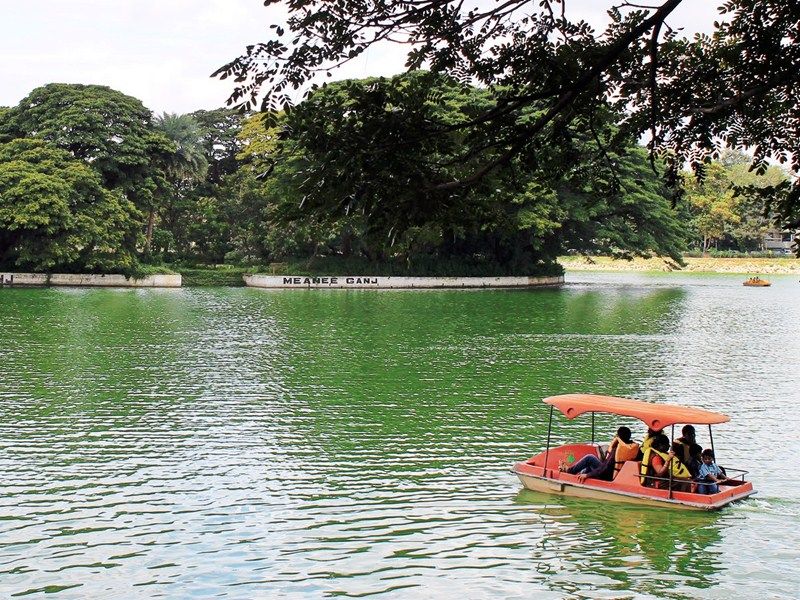 When in Bangalore, you absolutely cannot miss Ulsoor Lake. One of the city’s best-recognized locations, Ulsoor Lake spans over 125 acres in the heart of the city, north of M. G. Road. The lake is said to be as old as the 16th century, from the initial days of the city’s establishment.

Every morning and evening a flock of joggers and walkers come to the path running along the perimeter of the lake, to not only enjoy exercise but also a tranquil spell by the lake. It was found by Rai Bahadur Narrainswamy Mudaliar and has a tree-lined island at its center.

Kayaking at the lake is a well-loved activity along with boating facilities provided by the Karnataka State Tourism Development Corporation. A variety of warm cafes dot the periphery across the road for you to enjoy a hot cuppa while enjoying the view.

Get Direction to Ulsoor Lake 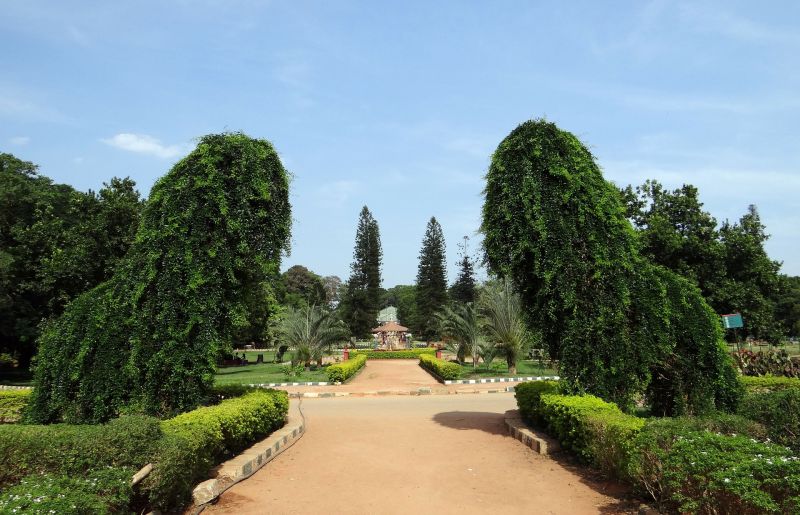 A Mughal-style garden to make you feel like royalty. The Lalbagh Botanical Garden is internationally known for its botanical artwork, scientific study, and conservation of plants. Located at Mavalli in southern Bangalore, the garden is famous for its glass house modeled after the gardens in Sira which dates back to 1889 and holds two flower shows.

The garden is of royal origin and started out as a private Mughal-style garden for the royalty by Hyder Ali, one of the famous rulers of old Mysore. It was later developed by Hyder Ali’s son Tipu Sultan and then by British and Indian forerunners of horticulture.

Lalbagh follows the concept of conserving horticulture and prides in their well laid out gardens, meticulous maintenance, scientific treasure, and picturesque beauty.

The garden remains open daily from 6:00 am to 7:00 pm throughout the year.

Get Direction to Lalbagh Botanical Garden

Spearheaded by Kempe Gowda, the founder of the city, the fort was later lengthened by Tipu Sultan, the Emperor of Mysore. Built in 1537, the fort sits right near City market at the junction of Albert Victor Road and Krishna Rajendra. The palace is within the grounds of the fort. A notable Islamic heritage, the palace is a well-known landmark of the city.

The Sultan called the palace “Rash-e-Jannat” and relaxed here during the summer. The Indo-Islamic architectural style is evident in the pillars and minarets of the palace. The Hindu temple of Lord Ganesha in the courtyard adds not only character but is a testimony to Tipu Sultan’s religious tolerance. The whole of the palace is made of teak wood, mortar, stone and plaster.

The two-storied structure is supported by wooden pillars that are gracefully carved. You can see numerous pictures, paintings, photographs and carvings of lost times in the art gallery which is also in the premises.

Get Direction to Tipu Sultan’s Palace and Fort

When in Rome do what the Roman’s do. So when in Bangalore…

Bangalore has the widest range of variety when it comes to food. The fresh coconutty food you’ll eat will leave you craving for more. From dosas, idlis to akki rotis and South Indian thalis, you’ve got to try it all. A few good places to start is VV Puram Street to get a taste of Bangalore’s street food. Here you won’t just get South Indian delicacies but also street food like spiral potatoes, pav bhaji, which you can enjoy to your heart’s content. 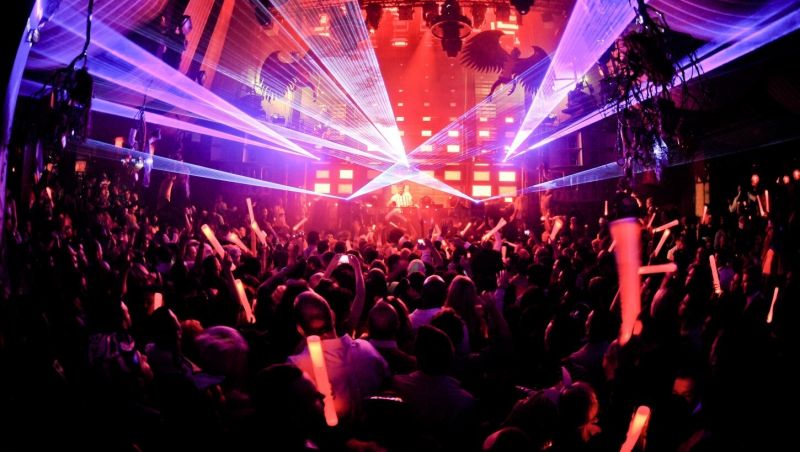 Bangalore is not only known for its heritage structures but also its crazy nightlife. From clubs to pubs, you’re spoiled for choice. To experience the nightlife you can visit bars like Skyye Bar, Opus, Athena Night Club, Purple Haze and High Ultra Lounge to start out. These places offer club style ambiance with music, dance and cocktails galore. Go unwind and have a good time.

Bangalore offers many things under one umbrella and if you visit even a few of these attractions, your trip will be worth it and if not then you’ll just have to come back to finish the list.